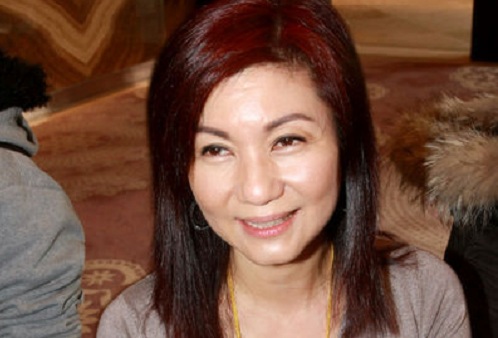 TVB executive manager, Virginia Lok (樂易玲) responded that she had received Joel Chan’s (陳山聰) phone call in the afternoon. Asked whether Joel called her to inform her of the good news that he had won heiress, Florinda Ho’s (何超雲) hand in courtship,Virginia evaded the question and replied that she would leave personal matters to be explained by Joel himself. When Virginia learned that Florinda had already admitted that she and Joel were dating, she then let her guard down and showed her heartfelt congratulations to the couple.

Virginia proceeded to say, “Actually it is perfectly normal to date. The TVB staff under my management would tell me about their personal problems to share or seek advice from me. I will then act as their mental support. Joel and Florinda handled this matter really well (by publicly acknowledging their relationship) so of course I will support them!”

Asked whether it was considered a good thing for Joel now that they have disclosed their relationship, Ms. Lok replied, “It’s not good to say it like this. A man has to have some kind of responsibility.” (There were rumors that Joel didn’t pay for his own airline tickets?) “I don’t believe this. Actually, Joel is an actor. His image isn’t the most important; whether his acting skills are good or not is the most important, or else given a chance he wouldn’t be able to develop them.”