By jayne on October 3, 2012 in Celebrity Weddings, NEWS 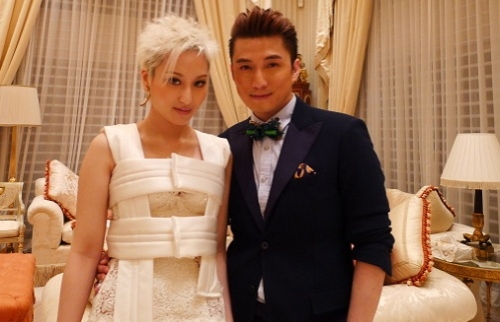 TVB actor, Joel Chan (陳山聰), may have ascended to the enviable position as casino tycoon, Stanley Ho’s (何鴻燊), future son-in-law. Rumored to have divorced his ex-wife for Florinda Ho (何超雲) last year, Joel will allegedly get married with the wealthy heiress at the end of 2013.

Since Joel and Florinda announced their high-profile relationship, the Hong Kong media often speculated when wedding bells would occur. Joel and Florinda often shared their dating and vacation photos online, as well as the lavish gifts they bestowed upon each other. According to Next Magazine, the couple’s year-long relationship has finally culminated in wedding plans next year, with the blessing of the Ho family.

Dubbed as the 13th richest man in Hong Kong with assets worth more than $2 billion USD, Stanley Ho reportedly purchased a new luxury house for Florinda and Joel’s use after their marriage. The new mansion is reportedly worth $400 million HKD and is located on Island Road in Deep Water Bay, Hong Kong.

Florinda and Joel share a deep passion for luxury designer goods, in which the couple will allegedly finance a new fashion business together.

With Joel’s flourishing “second career,” the 35-year-old actor was accused of taking long vacation breaks from TVB and neglecting his acting duties. Joel reportedly has cold relations with TVB management and has has not acted in a TVB drama for more than a year since The Last Steep Ascent <天梯>.

Source: Next Magazine #1178 via ihktv.com