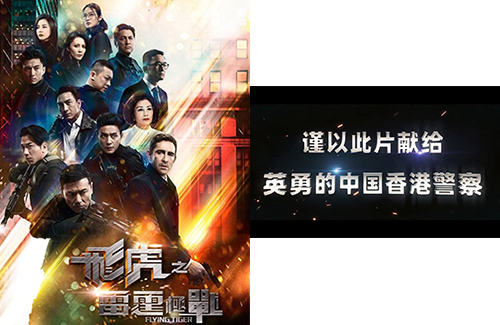 It’s already been two weeks since the Shaw Brothers’ web series Flying Tiger 2 <飛虎之雷霆極戰> was made available for streaming in mainland China, and the results are impressive.

The show debuted with an index of 48.39 on September 6th, according to a chart released by Vlinkage which compiles the amount of clicks and streaming activity from iQIYI, Youku, social media trends, and the Baidu search engine. It has stayed consistently in the top five since its debut and reached its highest, 68.67, at number two on September 15th.

The series is a spiritual sequel to last year’s Flying Tiger <飛虎之潛行極戰>, which broke past 500 million views in China. In Hong Kong, where it aired on TVB, it reached an average of 1.6 million live viewers per episode.

The series follows a special action unit within the Hong Kong Special Duties Unit, which was formed to deal with complicated cases that a regular Hong Kong police unit would not be able to handle. The show has dedicated its opening sequence to the Hong Kong Police Force, with the words, “This film clip is dedicated to the courageous Hong Kong China Police Force.”

Originally scheduled to air on TVB’s anniversary season, Flying Tiger 2 was pulled out of the broadcast line-up last minute due to high political unrest in Hong Kong. As of September 20th, Flying Tiger 2 still has no television air date.