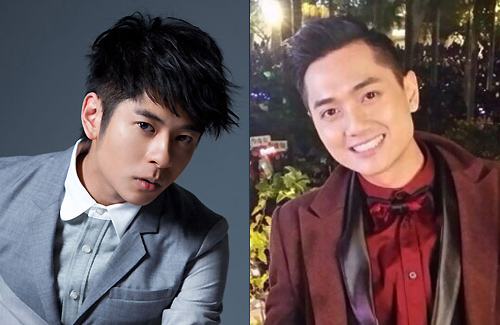 Alfred Hui (許廷鏗) and Fred Cheng (鄭俊弘), two of the Hong Kong music industry’s popular rookies, revealed that they are currently working on their new solo albums, which are expected to be released this year.

Known affectionately by the press as the “Double Freds”, the two young stars have recently joined the TVB-owned record label Voice Entertainment, which has also recently signed Joyce Cheng (鄭欣宜) and Linda Chung (鍾嘉欣). As one of the first few artists to join the record label, the Hong Kong media reported that Alfred and Fred are in a fight to become the company’s “number one brother”.

Alfred, who had helped Fred while the latter was competing on The Voice of the Stars <超級巨聲> singing competition last year, clarified, “Maybe it’s because we have both collaborated on The Voice of the Stars. I already knew [Fred] was not the type to compete or fight against anyone. We don’t have an awkward relationship. In fact, we always talk and eat together privately. Honestly, when it comes to the spot of ‘number one brother’, neither Fred nor I are eligible for it.”

Fred, who debuted as a TVB actor after winning a singing competition in 2001, insists to call Alfred his senior despite the fact that Alfred had debuted much later. “My singing career started late, and it’s unnecessary for us to fight.”

Alfred and Fred revealed that their label had also superstitiously compared their birth times, concluding that it will be better if Fred releases his album in the summer and Alfred in the winter. “There is no reason to fight!” They also expressed their interest in releasing music as a duo.

On recording his debut solo album, which is expected to drop in the summer of 2014, Fred said, “I definitely feel the pressure, especially when our boss [Herman Ho 何哲圖] would sit in the studios and watch me record. The producer even told me that I sounded much more relaxed when he’s not in the room! But really, our boss has helped me a lot, especially when it came to choosing songs.”

Fred added that he will temporarily take a hiatus from acting after he completes the filming of his current TVB drama in order to focus on his music career, He said, “In the new year, it is most important to stay healthy. I also wish to earn more singing jobs. I’ve once experienced losing my voice before, and it dispirited me. In the year of the horse, I need to stay healthy for my jobs.”

As for Alfred expressed that 2013 was a year of encouragement. Having won numerous of awards and successfully holding solo concert tours, Alfred said he will work even harder in the upcoming year. “If you asked me if I wanted to try acting in dramas in 2013, I would have said yes. However this year, in order to thank the music industry for taking care of me well last year, I will put in all my efforts into my music in 2014.”