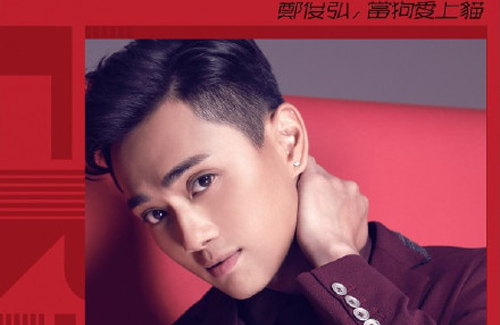 Fred Cheng (鄭俊弘) released his second album, When A Dog Loves a Cat <當狗愛上貓> last month.Spending over a year of preparing, Fred ensured that everything pertaining to the new album was perfect to the last detail. Because red is his lucky color, the singer decided to package the album cover with a sharp red theme.

To help create buzz for his new album, Fred organized a war game to promote the lead single, “Exploding Fire” <炮火>. Extremely pleased with his newest release, Fred could not contain his excitement and expressed, “The album was printed in Australia so in terms of sound – it should be very good. The red packaging coincides with the Lunar New Year so it would make a perfect holiday gift.”

Since Fred has spent the last year preparing his new album, he will spend a few days after the Lunar New Years to rest before taking part in new series, The Conspirators <與諜同謀> with Gallen Lo (羅嘉良).

Working with Gallen for the first time, Fred expressed his eagerness to learn from the superstar. “The series involves conspirators in the business world. Would I be playing the villain? I hope not. I look forward to working with Gallen – I’m willing to learn, so there will be no pressure.”