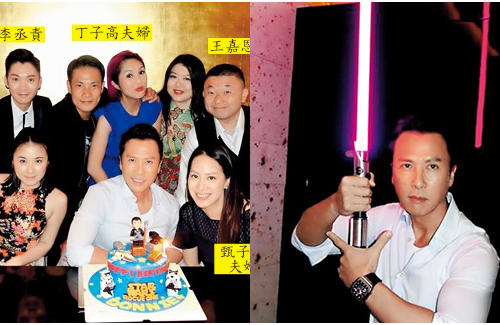 The “universe’s strongest” actor Donnie Yen (甄子丹) definitely lived up to his nickname this July when his friends surprised the 53-year-old action star with a Star Wars-themed birthday party. Donnie has just completed the additional photography for his upcoming film Rogue One: A Star Wars Story, and is preparing to promote the film once it opens worldwide this December.

Earlier, close friends including Miriam Yeung (楊千嬅), Real Ting (丁子高), Chow Kwok-fung (周國豐), Lee Shing-chak (李丞責), and more, surprised Donnie with a Star Wars-themed birthday party. They gave him a custom-made purple lightsaber as a gift, and decorated his birthday cake with adorable custom-made Star Wars designs that had his character, Chirrut Îmwe, at the center.

Rogue One is the first stand-alone Star Wars Anthology film produced by Disney. It is set before the events of Star Wars: Episode IV — A New Hope, and is about the Rebel Alliance recruiting a team to steal the plans of the Death Star. It also stars Felicity Jones, Diego Luna, Ben Mendelsohn, and Jiang Wen (姜文).