Gaile Lok to Remarry This Year? 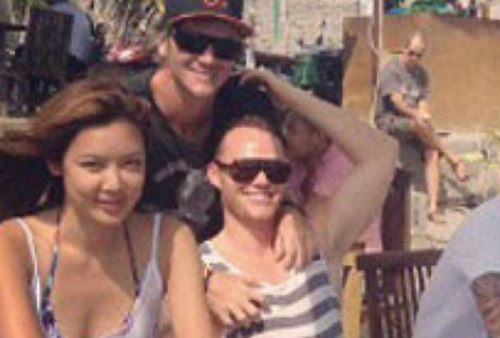 Since her divorce from Leon Lai (黎明) in October, Gaile Lok (樂基兒) has been traveling the world with friends and posting photos of her vacations on social media. Among the many friends who accompanied her on these trips, a New Zealand surfer named Cuz was rumored to be Gaile’s new lover.

Cuz revealed their intimate relationship last year when he posted a photo of Gaile in her underwear via his Instagram account. Although both sides denied the rumors, Cuz was frequently seen by Gaile’s side whenever she traveled to Hong Kong for work projects.

Recently, reports surfaced claiming that Gaile has accepted Cuz’s marriage proposal last month and is planning to remarry by the end of this year. According to sources, Cuz uploaded photos of the engagement ring last month to share the good news. The photos were then quickly deleted as Gaile wished to maintain a low profile. Some speculate that Gaile is bound by her divorce agreement, and is unable to publicly reveal her new marriage plans.

After accepting the proposal, Gaile has been wearing the engagement ring whenever she met with friends and freely discussed her desire to get married within the next six months. Friends are even expecting her to spontaneously invite them to Bali to attend the wedding.

Since the rumors began, Gaile and Cuz have both set their social media accounts to private status to block public access to their controversial photos.

On Wednesday, Gaile’s management company stated they do not interfere with their artistes’ private lives and will not comment on this rumor. The company added that Gaile is currently not in Hong Kong and she has not sent word about any marriage plans.

When reporters contacted Gaile to confirm the news, Gaile expressed shock and disbelief as she responded via WhatsApp. “Marriage is a big deal. There is no truth to these rumors!”

28 comments to Gaile Lok to Remarry This Year?