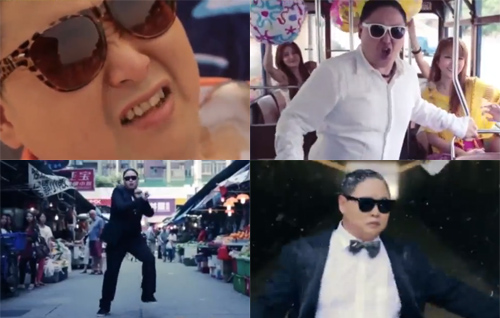 Psy’s Gangnam Style has already reached more than 400 million hits. His signature “horse dance” style has many followers all over the world. It was during a chat that Ekin Cheng (鄭伊健) and Leo Ku (古巨基) suddenly developed this idea of having William Chin portray the Hong Kong version of Psy due to their close resemblance and to fulfill Wilson’s dream to act before the camera.

The trio directed the parody “Hong Kong Style”  flavoring it with local elements. The Hong Kong version of Gangnam Style features William Chin in Psy’s trademark dance. This video was shot all over Hong Kong, including scenes on a tram, in a  marketplace, on the MTR, and in the Hong Kong Jockey Club betting center.

Leo, Ekin and Wilson’s friends joined their ambitious project by making special guest appearances. Eric Tsang (曾志偉), JJ Jia (賈曉晨), Chin Kar Lok (錢嘉樂), Jerry Lamb (林曉峰)  perform in the video. William looks almost identical to Psy, so even if his dance moves are not as smooth, the video is  still receiving a lot of acclaim.

Support From Many Friends

During a telephone interview yesterday, Leo was asked why they decided to produce “Hong Kong Style”. While he was at the gym with Ekin, Leo saw Psy on TV. They immediately noticed that Psy looks like their friend, William Chin. Leo and Ekin vowed to cast William as Psy in a Hong Kong parody. Ekin revealed that before William became a producer, he wished to be an actor, and this video will fulfill his dream. William was then recruited, and the snowball kept on rolling.

While making  this video for fun with basically a minuscule budget, Leo, Ekin, and William sought help from Eric Tsang, Jerry Lamb, a choreographer, lighting professionals, mechanics, and special effects professionals. Only a small amount of money was spent, but the end results resembled a big production. The entire project–from its first conception to its completion–took only two weeks. Both Leo and Eric wanted to thank all people for their time spent on the project.

Leo Ku also joked about how they roughed up William during the shooting. He said, “As a producer, William is usually the one who yells and screams at the sets. Now it’s time for him to have a taste of his own medicine. Ekin and I were yelled at him viciously   His dance moves were bad, and he has close to zero acting experience, so he should be focused on his acting. Yet, he spent most of the time trying bug other people’s jobs, and made Ekin and I so upset at him. He deserves it, but everyone watching said he was funny!”

When asked why he and Ekin has such limited screen time in the music video, Leo said, “Originally, we did not have any plans to appear in the video, but William needed support and was asked us to be in it. I injured my waist in the past and was risking it when I did the dance move.”

A Wedding Gift for Ekin?

Trying to deny the notion Ekin and Leo were trying to fulfill his dreams of acting, William “Hong Kong Psy” Chin said it was the other way around — he was trying to help Ekin and Leo to fulfill their dreams of directing! William said, “I was just trying to show off my singer side,” although he did not actually have to sing.

When he was told Leo said he danced like a robot, William said it was all gimmicks. He did not even practice his dance moves. He also mentioned his friends helped him out. Eric Tsang sacrificed his day at the golf course, JJ Jia spent two days out of her busy schedule to help out, and Kar Lok participated although he needed to spend his time taking care of his upcoming November wedding.

William was asked if he would perform his “horse riding” move during a charity show, he said he will have to think about that since he may not remember the move. And as to the rumor of the whether the project was a gift for Ekin’s wedding, William denies it, saying if it was for a gift, it would be for Chin Kar Lok instead of Ekin.

Talented JJ Learned the Moves On the Fly

In the video, JJ Jia portrays Hyuna, a member of the Korean girl group, 4Minute. JJ was worried that she did not do a good job without the time needed for practice. She said she learned all the necessary moves during the day of shooting, and worried about the imperfection. However, as long as people find it funny, JJ will be satisfied. When asked if the MTR cleared the location to assist the filming, JJ said they did it without their permission, and shot the clips with many onlookers.

In addition, Willaim’s girlfriend, Calinda Chan (陳宛蔚) also performed in the video. Her status did not generate more screen time for her. Calinda said she asked to be placed at the back of all dancers since her dancing is not professional enough. When asked about the lack of screen time, she said “Fat Will” (William) is a really fair guy, and she is not upset. Watching Ekin and Leo switch their roles with Fat Will was funny enough, and a behind the scenes video releasing sometime in the future should be even more humourous.