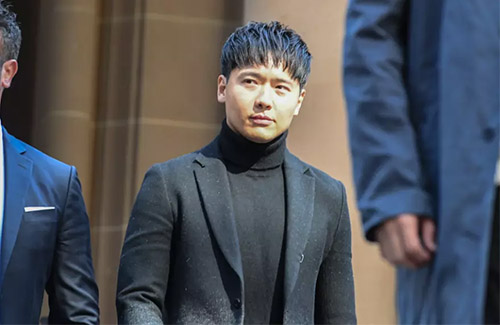 Chinese actor Gavin Gao (高云翔), who was arrested in Sydney on March 27, 2018 for alleged sexual assault alongside Chinese film producer Wang Jing (王晶), had his final preliminary hearing on November 9th, seven months after his arrest. New developments have indicated that Gao may be faced with nine fresh charges, including several accounts of indecent assault in company.

The incident happened on March 27th: at a wrap-up party for his new film, Wang Jing allegedly lured the unwilling victim up to his hotel room. Gao arrived later and stayed in the hotel room for 36 minutes. The following day, the victim and her husband reported to the police, accusing Gao and Wang for sexual assault. Both of them were arrested, and DNA evidence on the victim’s clothes belonged to Gao.

On Friday’s hearing, Gao questioned the reliability and validity of the victim’s testimonies, citing irreconcilable inconsistencies in the evidence she provided. In the victim’s first testimony, she said she rejected Wang’s advancements, but CCTV evidence showed differently. “In the victim’s first testimony, she did not say it was Mr. Gao who had assaulted her.” The victim also stayed with Wang for at least an additional hour after Gao left the hotel room.

Gao’s lawyer also pointed out the discrepancies of the victim’s claims. She claimed she was unable to contact her husband while she was in the hotel because she couldn’t get a hold of her phone, but evidence had pointed otherwise, and the victim also refused to do a medical check at the time.

The prosecutors, on the other hand, pointed out that Gao and Wang’s semen were found in the room, which is hard evidence in proving that sexual activity did occur that night. The prosecutors added that the victim may have agreed to enter Wang’s hotel room, but that does not mean she agreed to having consensual sex with both Wang and Gao.

After returning from court recess, Gao’s lawyer questioned the victim again, asking why she decided to “magically” change her first two testimonies to create more inconsistencies. The prosecutors argued and stressed again that even if the CCTV records showed that the victim did not initially reject Wang, and may have even showed interest in him, it does not mean she consented to performing sexual acts with both Wang and Gao.

The judge has postponed her decision to next Wednesday, November 14, 2018.