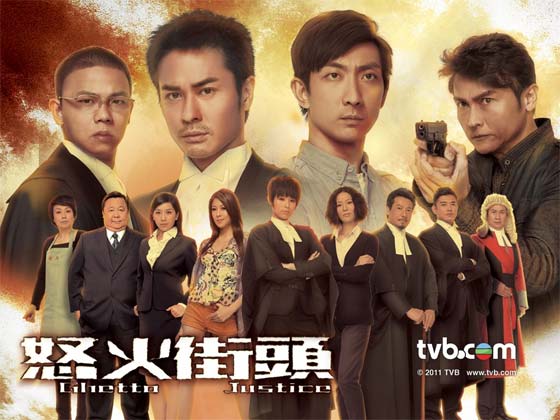 This is a review. By coming here and reading my review, you would have already understood this will contain spoilers. By doing a review I want to use as much of the story to prove my point but will reserve some plots as much as possible.  But spoilers is inevitable and should enhance the attractiveness of the drama and not ‘spoil’ your interest in it.  A good drama will be a good drama no matter what.  Although these opinionated articles of mine are titled ‘reviews’, I take my creative license to critique and analyze than merely saying I like or dislike something.  I must say, your feedbacks both negative and positive have been a great motivation!

The story centers a barrister by the name of L.A Law (yes…that’s his name) who has abandoned the superficial, materialistic, elitist, pretentious world of the upper class and moved into the ghetto world that is Sham Sui Po because of a mistake during one his legal cases stemming from 7 years ago.  He started working along his best friends Ting Ka Fu, the community service center owner, George Mai and But Chik.  Their mission is to provide legal service to the lower class and believes everyone has human rights no matter who you are.

Who knew Hong Kongers even know what ‘Ghetto’ means?!  When I heard the voice of Mc Jin, that explained a lot.  Also, I don’t like Chinese rap/hiphop songs.  It sounds funny and it doesn’t have that tough urban feel.  It sounds like back in the day when they would do Chinese rhymes while hitting rice bowls with chop sticks.  However, no one can do it better other than Mc Jin.  This song also fits very well with the drama.  I liked the opening theme, it didn’t show any upcoming scenes.

‘Ghetto Justice’ is a BRILLIANT drama embracing the gray area of justice and braves the idea of what is morally right- not what is legally right.  It focuses on social injustices and prejudices on gender, uneducated, and lower class.  Appropriately named ‘Ghetto Justice’, it centers around a group of best friends fighting for the legal rights in the ghetto which inhabits the rejects and ignored individuals of society.  They use their talents and legal knowledge to do good.  This drama motivates audiences to think many times over the question ‘Should we fulfill what is morally right or what is legally righteous?’  I used the term ‘righteous’ to describe the abuse of one’s rights to impose their personal beliefs onto another human being.  This sort of narrow-minded feeling of entitlement ignores the needs of others and promotes a more judgmental society.  In a world where you can cover people’s conscience with money and use one’s occupation to justify actions that are against their morality with legal reasons -what is ‘right’ anymore?  Where should the balance be?  This drama offers audiences to be part of jury that can either judge or accept the ‘abnorms’ of society.  They used characters of a senior citizen, abused housewife, prostitute, teenagers, personal assistants, and a sibling love affair.

Stereotypically speaking, China is known for being obedient and hard-working.  Our previous generations has been raised with socio-political propagandas that has caused grave corruption and chaos.  This helps explain some characters who are intimidated to deal with anything legal.  Yes, this is also an issue anywhere else, but with China, I personally feel a general consensus of not wanting to challenge authorities and no-complaints. So when do we question authorities?  (Read about the ‘Strip Search Prank Call Scams)

The Band of Brothers:

The strong bond between the four best friends, L.A- a barrister, George- a legal advisor, Ting Ka Fu- a social worker, and But Chik as a police officer can be viewed as social and legal guardians of Sam Shui Po.  With the knowledge and passion of every element (law, law enforcer and that helps a society sustain (not necessarily order) but peace and fulfilled their social obligations at its fullest potential. This also puts forward the idea that if everyone does their part in society and lends a hand, the world would be in a fact- a better place.

Thanks to the brilliance, wit and intelligence of script-writers, Lau Choi Wan (who co-wrote ‘Gun Metal Grey’) and Chan Kam Ling, this is NOT an annoying preachy drama.  The use of words and logic overrides the appeal of some moral lecture that makes you feel bad about the mistakes you made and makes you feel like a little child.  (Like most TVB dramas.)  ‘Ghetto Justice’ however, makes you reflect and use your mistakes as learning opportunities to hopefully move forward and see the bigger picture and a farther future.

Played by Kevin Cheng, he is a barrister of the former exclusive and privileged world who resorts to helping a community who couldn’t afford it.  He has been mistaken as careless but he is just carefree.  Audience can easily see that he is sincere verses someone passionate about their jobs because of paycheck, living style, network, etc. This shows that L.A. really has no ulterior motives.  He worries about what it takes to be a good human being above all else.  He cares more about the social rights than the legal rights when it comes to his community.  This point is made very clear.

Kevin did a great job portraying it not because of his intentions but because the casting director did a great job.  Kevin didn’t exactly have to transform per say but the way he naturally speaks and handles himself suited the role well.  It is also a plus when you see him pick his nose, smell his feet and shows his butt crack to add onto his character.

Played by the wonderful actress Myolie Wu.  She is every word of the definition of what it means to be a modern woman.  Short hair, black fitted suit, high heels, and a sharp tongue that can speak 40 words a minute to rebuttal your statement.  With the hopes of ascending to be the barrister of the privilege society, she tries so many ways to succeedShe doesn’t need a relationship but never denied her affection towards L.A.  I also love her strong character and let-loose attitude! For example, when they first had sex, Wong Si Fu also wanted it and she was just as passionate, which made this scene easy to bear and not awkward to watch.  She wants what she wants and goes after it.

Myolie Wu seemed to be armed with some of the most talented image consultants, hair stylists, and make-up artists that helped her with her chameleon changing abilities.  Although you can see her signature quirkiness and natural charisma, she developed a little bit of a dark, cruel and serious side for this role.  This new dark side of hers wasn’t a huge or sudden change (even though it seemed sudden in the story), she did a great job where it seemed as if it made sense with her prior optimistic self in the beginning of the drama.  We see her character mature and seemed enlightened by Kevin’s philosophy in the end. I felt they had great chemistry and fed off each other’s energy and timing really well.  When L.A. would act immature, Si Fu would tone him down.  When Si Fu couldn’t come up with a solution, L.A. is there to guide her.  Yes, she did win the last court case but I’m talking about the overall feeling of the drama.

-As I’m typing this, it just made me think, a lot of media promote images of females like mother figures and males like leader types.  I would like to see more where girls solve the problems that guys couldn’t. I’m not talking about mother figure oriented drama. (Mother’s are always right anyway. Lol.)

‘Ghetto Justice’ Reminds Me of:

‘Boston Legal’ and ‘The Practice’.  Anyone still remembers ‘The Practice’?  I love these shows!  Some of you might see similarities where street smarts come into play in the court room.  One is where lawyers would ask questions to provoke an emotion and then take the question back right before the persecutor objects.

Other things I love:

1)     I love the ensemble cast! Whoever is the casting director for this production is a genius.

2)     This drama is one of the most goal-oriented drama I’ve seen.  Everything from the title to the song artist & song, character names, character development, casting, stylist, setting, dialogue, symbolism, EVERYTHING fits together so well. Which makes me think everything is planned and the production team really put their heart into it.  After all, this drama is about the people so I really appreciated the details.

4)     I love how Jazz Lam had a totally different character in here and I find him sexy in this role- towards the end.  He can really command presence with his voice!

5)     I love it when actors who usually take serious roles, finally do a comedic role.  Eddie Kwan did a great job. Though I wish he had more screen time in here.

What can I possibly criticize?

I don’t purposely look for things to critique.  But honestly in this one, I don’t have much to critique. Other than…

1) In episode 7, Tsing Tsing (Sharon Chan) went into a café asking Si Fu to be her legal advocate.  The background is obviously fake but what I have to complain is the person who is playing Sharon Chan’s back.  This is the typical of TVB, fast, pretty, and good.

2) When Tsing Tsing was held captive and had a towel stuffed in her mouth but their hands weren’t tied. (Does the towel stuffing really work? Can you really not spit it out?) It was weird when you see Tsing Tsing shake her head ‘no’ and then next shot is man hands taking off shirt, then back to her shaking ‘no’ but then next shot is fumbling man hands taking off bra, then head shake ‘no’ then take off pants.  This scene’s shots don’t match up well and the man hands don’t match well with Sharon Chan’s emotions because I felt like she should be hesitant, not rushing to take it off.

3) When George is depressed, he hides in a kids playground. The other three guys came with liquor onto the playground to cheer him up and they run around wildly.  I know I’m just being picky and this doesn’t necessarily promote bad behavior, I just thought….couldn’t they have picked a better place? This is one of the greatest dramas TVB can ever come up with among ‘War and Beauty’, ‘Rosy Business’, ‘Can’t Buy Me Love’, etc. But they’re nothing like each other.  ‘Ghetto Justice’ brings something fresh to the industry and it’s about time it incorporated a younger generation’s appeal by addressing controversial issues over romance comedies, family-business dramas, and such.

1)     Do you think the drama would’ve been as successful if the band of brothers were actually a band of sisters?

Note: This review was written by Yina for JayneStars.com. Please visit Yina’s blog.