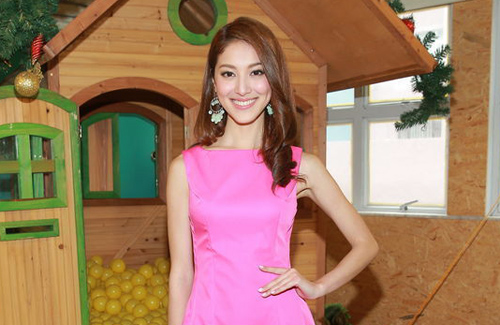 Grace Chan (陳凱琳) was recently spotted entering Kevin Cheng‘s (鄭嘉穎) home. While the pair explained that Grace was there to only borrow DVDs, there appears to be strong undercurrents in their budding relationship. Kevin did not eliminate the possibility of dating, and replied to the incident by stating, “Everything starts with friendship!”

After filming Blue Veins <殭> for two months, Grace and Kevin grew friendly on set. Grace praised Kevin, “He has good work ethics, and is caring towards other employees and people around him. He takes care of everyone as if this is his or her first drama. If I have questions, we would study them together.”

Grace disclosed, “Actually, we are only friends – maybe people think it’s necessary to spread rumors because we’re working together. I don’t think that [age] affects anything. There are many examples where age gaps don’t matter and the relationships are still very good.”

In January, Kevin was seen casually kissing a woman at a nightclub. Kevin hinted that the relationship did not progress after media exposure, and stated that he was still single.

Despite Kevin’s string of romantic rumors, Grace does not think Kevin is flirtatious. Grace expressed, “Everyone has a romantic past, but that doesn’t affect who he is now – people change! We’ll be friends first!”

When asked what qualities she looks for in men, Grace explained, “It’s very important that they’re good to their friends and family. They don’t have to think of surprises or do anything special. Once you get to know that person, his character will attract you – so there isn’t a particular quality I look for.”

As to whether she thinks Kevin is actively pursuing her, Grace simply replied, “We are only friends right now!”