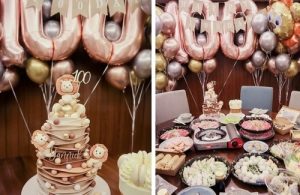 After getting married in 2018, Grace Chan (陳凱琳) and Kevin Cheng (鄭嘉穎) welcomed two sons, Rafael (鄭承悦) and Yannick (鄭承亮), in just two years. The couple happily announced Yannick’s arrival on July 27 and recently celebrated his 100 days with a big hot pot feast at home. Grace posted photos of the happy celebration on Instagram, featuring tons of balloons and a customized lion-themed birthday cake as a nod to Yannick’s Leo horoscope.

Alongside these photos, Grace wrote, “Dear Yannick, daddy and mommy chose this name for you because it means ‘God is gracious.’ Not only has He given us your older brother, Rafael, but He has blessed us with you – our sweet baby boy and little brother. You are precious, and we love you so much.”

While Yannick’s English name represents God’s graciousness, his Chinese name means light. They hope that their son will grow up healthy while filled with light and love. And it is obvious that he is surrounded by robust love, as seen in the celebration photos. 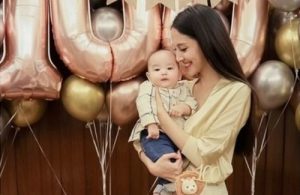 In one photo, Grace held Yannick, who looked at the camera with his round eyes and face and showcased the sharp features that he inherited from his parents. Older brother Rafael also took after his parents’ photogenic genes, as netizens noticed that he is starting to resemble Kevin more and more in a photo of Kevin carrying Rafael in his arms.

Grace said in a phone interview, “I think Yannick’s eyes look like mine because it is big and round, but his overall face is very boy-like like his father.”

As to how Rafael is adjusting to his new role of being an older brother, she said, “Rafael is really good. He loves his little brother.”

She added that her elder son is in school now, so she’s a little busier these days, but it is not stressful taking care of two children. “Though it is busy, I enjoy my time with them,” she expressed.