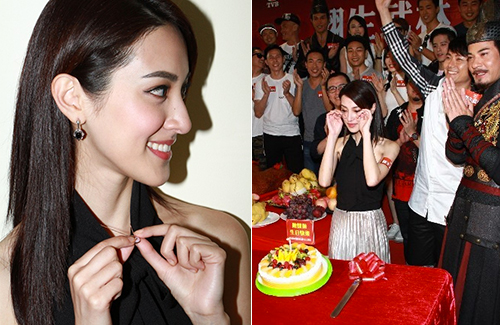 The cast of TVB’s new historical period comedy Wulin Revival <翻生武林> held a blessing ceremony on Friday. The cast surprised their female lead Grace Chan (陳凱琳), who turned 25 on June 23rd, with a birthday cake. Feeling emotional and grateful, Grace was in tears when she thanked her cast members.

Backstage, reporters told Grace that they heard she “speedposted” to Kevin Cheng’s (鄭嘉穎) home the previous night. Asking if they had celebrated her birthday together, Grace admitted, “Yes, I went to his house. Afterwards I went out with a group of friends for dinner.”

Asking why she didn’t celebrate the rest of the night with her boyfriend, the Captain of Destiny <張保仔> star said, “It’ll be happier if there’s more people. The both of us have already eaten dinner together two nights ago as an early celebration. Actually, I am already very grateful that I was able to celebrate my birthday. We originally had a studio schedule last night, but it was postponed so that was why I was able to eat with everyone.”

What did Kevin give Grace for her birthday? “It was a necklace. I’m wearing it right now.” Grace pulled out her necklace, which had a pink pendant. Asking if she’s surprised with the gift, she said, “Yes. I wasn’t expecting him to give me something. He knows I like pink so he chose a pink one for me. He’s very attentive.”

Will Grace give Kevin more brownie points? She laughed and said, “He’s always had a lot!” (What was the meaning behind Kevin’s twelve roses?) “I think it represents romance.” (How did you feel about it?) “Very happy, of course. He even drove me back to work after we ate dinner.”