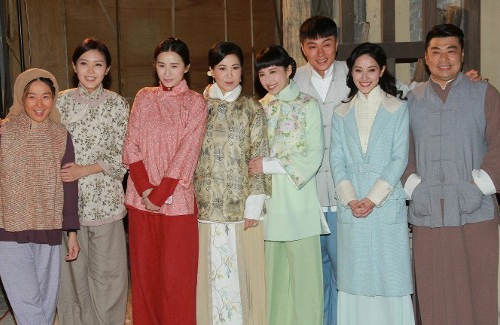 The cast of TVB’s new period drama Safety Valley, Catchy One by One <平安谷·逐個捉>, including Raymond Wong (黃浩然), Louisa So (蘇玉華), Grace Chan (陳凱琳), Katy Kung (龔嘉欣), Zoie Tam (譚凱琪), and Cilla Kung (樂童), had a press meet last night when they were filming for their new drama. The period drama centers on a large family living in a very backwards village during early 20th century China. It focuses on the lives of young women, who face prejudice in a village rooted with deep traditional values.

Grace, who plays Raymond’s wife, is regarded as one of the members of the “Young Wife Alliance” on the show. Grace, along with Katy and many of the other “young wives” on the show, take turns bringing food and treats to the cast and crew.

The girls grew close on set. Grace shared, “Originally we had a day off, and the girls planned on doing a sleepover party, where we get to dress up in cute pajamas. We wanted to troll Cilla into wearing sexy pajamas instead. However, we never went through with it because we had to work after all.”

The drama still has about one more month of filming left. Raymond revealed that he and Grace will have to do a swimming scene very soon. Lamenting the cold weather, Raymond said he will be shirtless. Asking if he has been working out, Raymond said, “I do, but I’m getting older after all. I have to prepare more. After having kids, I’ve gotten used to eating dinner earlier, so by ten o’clock, I am starving. For this scene, I’ve stopped eating my midnight snacks.

Grace butted in, “You still eat like two bowls of rice though!”

Starring in an ensemble show with little individual scenes, Katy said filming for the show had been enjoyable. When she asked about the “most housewife” member of the Young Wife Alliance, Katy laughed and said, “We are all pretty housewife. I’m in charge of the salty and wet (referring to sweetened fruits) while Grace is in charge of bringing dessert, like cake.”

Woud Katy like to be a housewife soon in real life? “Let’s have Grace get married first. If she’s met the right person, there’s no point of waiting! The year of the chicken is a great year.” (What about you?) “I have no expectations. I know I can’t handle it, and I won’t be able to manage my time well. I can’t even manage time to clean my own house.”

What about Katy’s roommate, Elaine Yiu (姚子羚)? “She’s on vacation right now. I’m just by myself now. Hopefully I’ll clean out everything by Chinese New Year.” (When will Elaine get married?) “I hope soon! She and [Cheng Tsz-bong 鄭子邦] are doing very well right now. She’d make a very good wife. I hope he proposes to her soon!”