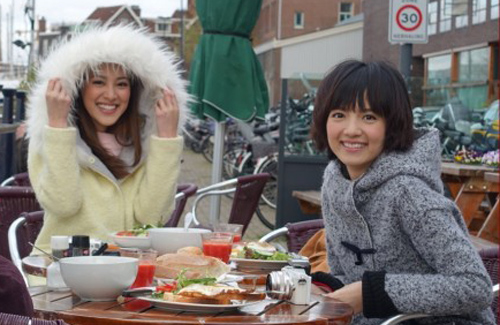 When the cast of Blue Veins <殭> flew to the Netherlands for filming, Kevin and Grace were still seen very friendly with each other, seemingly ignoring the romantic rumors that surrounded them. After completing the two-week on location filming, the cast returned to Hong Kong yesterday. Kevin and Grace maintained their distance and left the airport without a word of exchange.

Kevin stepped out of the gates first and appeared to be in a foul mood, ignoring all of the reporters’ questions and made a beeline to his car.

Coming out of the gates last, Grace was very friendly. When asked about spending quality time with Kevin in the Netherlands, Grace added, “Of course not – we were split into two different teams while filming there. My mains scenes were mainly with Anjaylia Chan (陳嘉寶) and I only had several scenes with Kevin. I only saw him when we had group dinners at the hotel. When we see each other, we’re like regular friends – it’s very normal!”

Coming to Grace’s rescue, Anjaylia immediately said, “I think Grace loves me the most because she stuck to my side during filming, as well as break time. Even when we were at the hotel, she would always come to my room to chat.”