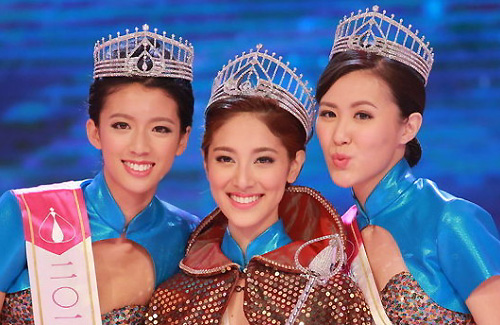 The 2013 Miss Hong Kong pageant took place on September 1, in Tseung Kwan O. Continuing with a new voting system that was first implemented in the 2012 pageant, the winners were selected using a one-vote-per-person format. With a total of 530,000 votes collected, fifty percent of those votes were from professional and celebrity judge evaluations, while the last fifty percent were based on popular audience votes.

Winner Grace Chan, 22 years old, is a college graduate and an early favorite in the pageant. In the Miss Hong Kong semifinals, which were held on August 25, Grace was among the five contestants that were chosen by the audience. Grace also won Miss Photogenic and the Tourism Ambassador award, as well as Audience’s Current Favorite and Media’s Favorite at earlier functions. Grace aspires to become a successful television presenter and artist.

Miss Friendship winner Tammy Ou Yang (歐陽巧瑩), who came in eighth in the pageant, was plagued with rumors and negative gossip throughout the two-month competition, but the 20-year-old expressed her confidence and faith.

In a round that tested the contestants’ heart rates, Tammy was asked about how she had dealt with her rumors. She said, “I am most unhappy when they talk about my family. They’re very important to me. I can handle everything else.”

Celebrity judge Eric Tsang (曾志偉) asked, “Then what about rumors of you working at nightclubs, losing your virginity at 13, smoking, and being vulgar?” Celebrity judge Nat Chan (陳百祥), who was testing Tammy’s pulse, noted that Tammy’s heart rate did not increase. Tammy calmly replied, “As long as it’s not about my family, I can handle it.”

Aside from Eric Tsang and Nat Chan, Carol Cheng (鄭裕玲) and Hacken Lee (李克勤) were also among the celebrity judges that co-hosted the event. Raymond Lam (林峯) and 2004 Miss Chinese International winner Linda Chung (鍾嘉欣) were also invited to the pageant as guest judges for Miss Friendship.

Raymond Wong (黃浩然) admitted that he was not very impressed with recent Miss Hong Kong pageants, expressing that he felt the older Miss Hong Kong pageants had more spirit and energy. What about this year’s pageant? Raymond said, “Nothing really special.”
Ex-rumored couple, Raymond Lam and Linda Chung, were put on the spot by pageant co-host Wong Cho Lam (王祖藍), who exclaimed, “One is Linda BB. Another is a guy who has a BB!”
In regards to the winners, Raymond Lam pointed out that the winners were very close to what the audience had hoped. Linda Chung praised title winner Grace Chan for her confidence.