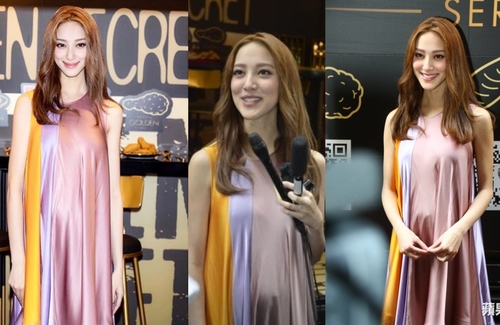 Just having announced her pregnancy less than two months ago, Grace Chan‘s (陳凱琳) baby bump is already showing! It was obvious under the 27-year-old’s loose dress while she attended an event for KFC on January 4. The actress acknowledged her appetite got bigger after getting pregnant with her baby boy, even yearning for midnight snacks around 1 or 2 a.m.

While Grace doesn’t ask husband Kevin Cheng (鄭嘉穎) to be her deliveryman, he is a strict father-to-be. “For example, when it comes to eating, he’ll tell me to eat fewer sweets and to eat healthier, but it can’t be helped because a pregnant woman’s appetite is always changing,” the expecting mother said. “But he says eating is a fortunate affair, so it’s fine.”

Lately, she has cravings for Chinese food, such as noodle soup or fried and oily food. Sometimes Kevin would prepare food for her in the afternoon. “He even said he’d cook soup for me, but I’m still waiting for that,” Grace shared.

She added that he is gentler nowadays and would touch her belly before she leaves the house to tell her and the baby to be careful. Grace also disclosed they finished preparing for the baby’s arrival. However, they’re still thinking of a Chinese name. “I want my daddy and mommy to help me name the baby to avoid any regrets since we won’t be able to change it,” she said.

On the other hand, they already picked out a few English names but might wait until the baby is born. “People say we’ll automatically know which name is suitable then,” Grace explained.