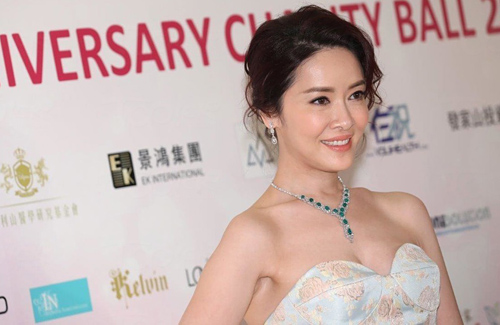 Ex-TVB actress Anne Heung‘s (向海嵐) elegant appearance became a hot topic after she was sighted at a charity event. Remembered for her roles in historical dramas, The Legend of Lady Yang <楊貴妃> and Love is Beautiful <無頭東宮>, the 44-year-old is thankful for her fans’ support and does not mind filming with TVB again.

Winning the Miss Hong Kong Pageant in 1998, Anne was one of the most promoted fadans during that time. However, Anne got tired of waiting for opportunities and eventually left TVB in 2008 for a career in public relations in Shanghai. Many fans were disappointed with Anne’s decision to leave the station.

Reminiscing of her career at TVB, Anne feels grateful for the opportunities in starring dramas but admitted that she lacked experience in acting, “I am grateful that I was lucky to encounter a good script. Many people had to shoot a long time to have such a role but when I first started, I was able to act two very memorable characters. Of course, looking back at my own work now, I was really young and I thought it was funny. I thought to myself, ‘Wow, why did I do that?’”

However, when recalling her role in Love is Beautiful, Anne felt happy for her role. She said there is even a possibility of filming again, “People grow up and have different experiences. This affects how they act and adds more to the acting. I am happy that people liked the character. Of course, I hope that if I encounter such a role in future, I can make a breakthrough. If the story is attractive, I will consider filming.”

Now at the age of 44, Anne has kept her beautiful looks. She shared her secrets, “I am very lazy, but I now I really need to keep [it up.] I love to exercise because it helps me keep fit. In terms of diet, I like to drink a lot of water.”