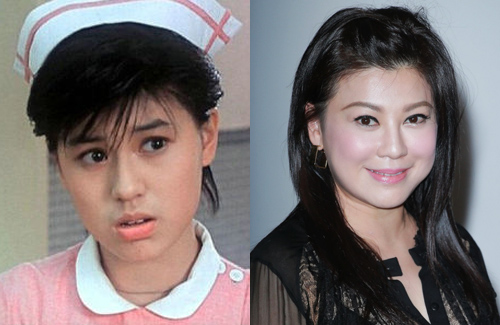 Previously known as Bonnie in her early career, Sheree had joined the entertainment industry when she was only 15 years old. Sheree is best remembered for her role in the popular 1980s film franchise, Happy Ghost <開心鬼>, along with In Rachel Lee (李麗珍), Sandy Lamb (林姗姗), May Lo (羅美薇), Fennie Yuen (袁潔瑩), and Charine Chan (陳加玲). Despite their different personalities and images, the film was a hit and spawned several subsequent sequels. The popular young starlets were unanimously referred to as the “Happy Girls”.

Sheree partook in only four films since her debut before leaving the entertainment industry to pursue a college education in Canada. After graduating from college in 1993, she returned to Hong Kong and led a successful career in finance. However, Sheree’s passion for acting remained, and she returned to the big screen soon after. Despite being cast in big budget films starring alongside Andy Lau (劉德華), Simon Yam (任達華), and Stephen Chow (周星馳), Sheree only landed small guest roles.

Unable to regain her popularity in film and with a thirst for knowledge, Sheree traveled to Beijing in 2006 and spent two years taking courses to obtain a MBA in Senior Management. During a brief interview in 2012, she shared that she is still currently working in the financial industry. The Happy Ghost star was also focusing on dieting and exercising to prepare for a comeback in a web-based drama before her untimely death.

Sheree’s death came as a shock for good friend and producer Raymond Wong (黃百鳴), who had only visited Sheree ten days ago, citing that she appeared to be in good health, was very sociable, and did not show any signs of illness. Raymond said, “The Sheree I know doesn’t smoke, drink, nor [hang out at clubs].” Asked if Sheree’s death may have been triggered by her excess dieting, Raymond said, “I’m not sure, but I know that she planned to film an Internet drama.”

Asked if Sheree had consumed weight-loss pills, good friend Leila Chow (周美鳳) said, “She mentioned taking dieting pills in the past, and I advised her to exercise instead! But Sheree told me not to worry, as she doesn’t take the pills often.”

“Happy Girls” Charine and Fennie had last seen Sheree at Raymond’s birthday party in April. Charine recalled, “I was shocked by the news of her death. She was a very cheerful and chatty person, who loved to laugh.” Fennie said, “It’s so sudden! It’s very hard to accept the news! The last time I saw her, she was very energetic and beautiful. We even agreed to meet up again next time. I don’t know what had happened! It’s a great loss! Many condolences to Sheree’s family!”