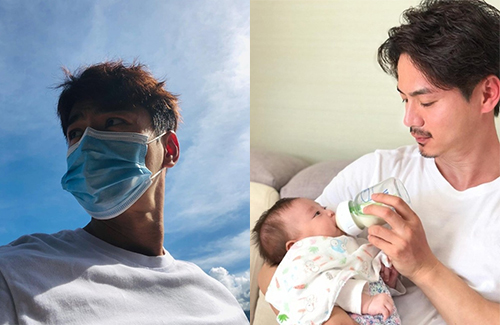 As per traditional Chinese customs, a banquet attended by family and friends would be held on the infant’s one hundredth day of birth. But due to the rise in COVID-19 cases in Hong Kong, Him Law (羅仲謙) and Tavia Yeung (楊怡) have no choice but to cancel their plans.

“We won’t be doing it,” said Him in a phone interview. “But we do plan on having a small get-together with family for a meal.”

Currently home-bound due to schedule postponements at work, Him gets to spend more time with his daughter. He’s making up for lost days, as Him was busy with the filming for Armed Reaction 2020 <陀槍師姐2020> during his daughter’s first few weeks.

“We’re being careful,” said Him. “I’ll cleanse myself from head to toe even after going out for a short errand!”

Originally, Him was scheduled to film the upcoming TVB drama Children’s Hospital <兒童醫院> two to three weeks after he completed Armed Reaction 2020. Due to the surge in coronavirus cases, TVB postponed all film work at a later date. Filming for Children’s Hospital will commence in August instead.

“I’m using this extra time to study the script,” said Him.