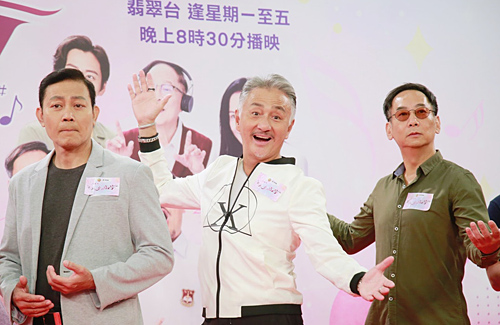 The group, as a whole and individually, performed many classic hits, bringing netizens through a trip down memory lane. While Ram and Joe are known singers, netizens were pleasantly surprised to see that Hugo has also got vocals.

Unknown to many, Hugo actually possesses professional singing experience, having worked as a part-time lounge singer in his younger years. Recalling his experiences, Hugo shared, “At the time, I was maybe 18 or 19 years old. I was curious about everything. After singing at the lounge for a bit, I went back to Singapore and joined the military, where I was placed in the band and continued to sing. I did seek out a teacher to help improve my singing. I continued to sing through the years, because I really enjoy it.”

Recently, Hugo moved to Malaysia with his wife Lily Chung (鐘淑慧), only returning to Hong Kong for work occasionally. It was rumored that the couple is living in a 4000-square-feet mansion overlooking the ocean. On whether he would miss Hong Kong, Hugo said, “This year, even though I didn’t have much work, I would go back and forth between Hong Kong and Malaysia. I still have a property here in Hong Kong, so I will definitely return sometimes when there is work.”

When reporters teased that Hugo was rumored to be a millionaire, Hugo cryptically responded, “I really like the phrase Willie said one time – you don’t have to earn a lot of money, so long as you’ve earned enough. At my age, everything is about balance. Since I am still able to walk and move around on my own, I want to do more things that I enjoy.”

Hugo Ng On Falling From Glory Back In His Heydays