Read at your own risk! Shocking spoilers were leaked online for TVB’s new drama The Dripping Sauce <大醬園>, and some of it will definitely leave a foul taste in your mouth.

With The Dripping Sauce, TVB is going back to their old roots of Republican-era stories that revolve around a wealthy family fighting for rights to their estate. Such family-oriented soap operas have always been popular successes for TVB—most notably Rosy Business <巾幗梟雄>, which kickstarted Wayne Lai’s (黎耀祥) fame. The Dripping Sauce has also been compared to the Chinese drama Nothing Gold Can Stay <那年花開月正圓>, which starred Sun Li (孫儷).

The Dipping Sauce centers on the large and wealthy Man family who have been managing a soy factory business for the past hundred years. It stars Hugo Ng (吳岱融) as Man Kai-shan, the head of house, who finds himself in a power struggle with his younger brothers. His younger brothers are Man Kai-shek (played by Timothy Cheng 鄭子誠), Man Kai-chuen (played by Gary Chan 陳嘉輝), and fourth brother, Man Kai-kong (played by Tsui Wing 徐榮). Their respective wives are played by Mimi Kung (龔慈恩), Stephanie Che (車婉婉), Florence Kwok (郭少芸), and Amy Fan (樊奕敏. 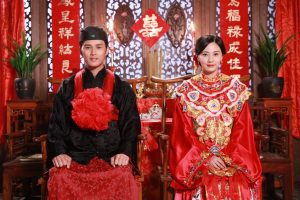 Female lead Rebecca Zhu (朱晨麗) plays Ha Siu-moon, an orphan who wanders from town to town to take up small jobs to earn a living. She eventually ends up working for the Man family’s soy factory and marries the family’s youngest son Man Cheuk-fung (played by Matthew Ho 何廣沛), who is also Man Kai-shan’s only child.

And this is where spoilers come in. 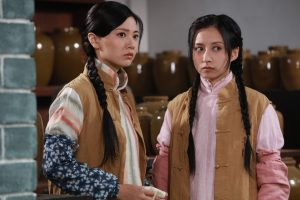 According to the spoilers, Ha Siu-moon is actually the biological daughter of Man Kai-shan and Chik Tak-yung (Mimi Kung). Assuming that their daughter had died at childbirth, they swapped her with another newborn infant, a boy they named Man Cheuk-fung.

But Siu-moon and Cheuk-fung being siblings isn’t the only spoiler that the Internet dropped. It turns out that Yip Sai-yiu (portrayed by Katy Kung 龔嘉欣), also an orphan and Siu-moon’s close friend, will be revealed to be the story’s main villain.

What do you think about these spoilers?