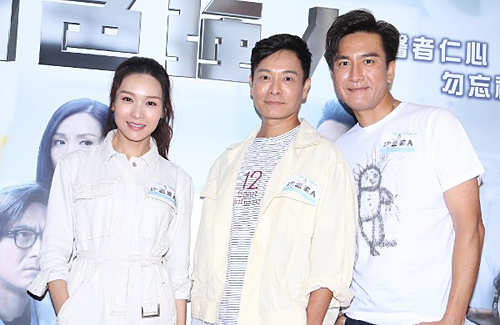 Celebrating the good ratings for new medical series Big White Duel <白色強人>, the cast engaged with fans at a promotional event where they played games together.

With the premiere episode generating 28.7 points in viewership ratings, Ali Lee (李佳芯) said that the male cast should show off their abs in celebration.

Roger Kwok (郭晉安), who was struggling to do the yoga activity during the event laughed, “My abs aren’t ready. (It’s all up to Kenneth?) Tell him to sing, Kenneth Ma (馬國明) sings really well and we’ll sing Silence is Gold <沈默是金> together if ratings get up to 33 points. (But Ali wants to see abs) Why are the actresses so open – we can’t have this. We should ask females to show abs instead since actresses are so incredible nowadays.”

Although there are six months left before the TVB Anniversary Awards, Roger openly supported Kenneth for TV King this year. Roger said he is very lucky, and whoever he has rooted for in the past, the person has always managed to win.

Unable to believe that the drama was so well received by the audience, Kenneth expressed, “The storyline is definitely different than the ones we’ve done in the past. There are very few Hong Kong shows that talk about the medical procedures, and this is not your typical housewife drama. I think we should film more series of this genre in order to test whether or not viewers enjoy it. I’m very happy– after the first episode, I received a lot of WhatsApp messages complimenting the series. It shows that Hong Kong viewers are great and they are able to accept different genres. (Are the ratings high due to your handsome looks?) I can’t say for sure, but my friends have said they’ve never seen me this cool before. [Chance of winning TV King?] I haven’t thought about it and I think the most important thing is that everyone loves the new show. Getting an award would just be the cherry on top.”

Confident in the future ratings for the series, Kenneth said if ratings continue to improve, he wouldn’t mind treating everyone out to dinner.

3 comments to Initial Ratings for “Big White Duel” are Promising