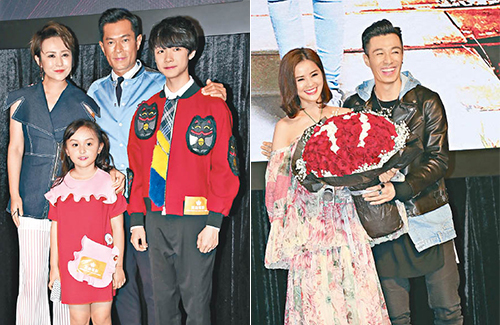 EEG will be releasing eight new films in 2017, as announced at a promotional event at the 2017 Hong Kong International Film & TV Market, or FILMART. It is being held at the Hong Kong Convention and Exhibition Centre in Wan Chai.

In addition to the eight films that were announced, Albert Yeung said EEG has already set out plans to invest in bigger productions in the next two years. The studio has just green-lit a film about the ICAC, which will be directed by award-winning collaborators Alan Mak (麥兆輝) and Felix Chong (莊文強). EEG is also producing Dante Lam’s (林超賢) Operation Red Sea <紅海行動>, which is currently filming in Morocco.

Directed by Benny Chan (陳木勝), Meow is a sci-fi comedy film about an abnormally large alien cat that invades a Hong Kong family. Louis Koo and Ma Li (馬麗) star in the film as a couple, with child actors Liu Chutian (劉楚恬) and Andy Huang (黃星羱) as their children.

“Whenever she lost her temple, I’d kiss [Ma Li],” said Louis. There’s several scenes of that, so I probably kissed her like five to six times.” (A lot of NGs?”) “A lot of them. It didn’t stop. At one point I was worried that she would think that I paid the director to do that.” (Broke your kissing record?) “Definitely.”

Ma Li said, “I’ve just completed the dream of every woman in China.”

Louis was all praises when he was asked about his experience on working with the child actors. When speaking about Liu Chutian, who was only 4 years old during filming, Louis said, “She wouldn’t stop eating during her scenes.”

77 Heartbreaks recruited the same team behind 2015’s Sara <雛妓>, the film that earned Charlene her second Best Actress nomination at the Hong Kong Film Awards. Directed by Herman Yau (邱禮濤) and written by Erica Li (李敏), the film stars Charlene and Pakho as a longtime couple going through a bump in their relationship. Gillian Chung guest stars in the film.

“There are a lot of intimate scenes between us,” introduced Charlene. “Pakho and I play a couple who have been dating for over ten years.” (What about bed scenes?) “There are some!” (How were they?) “Great!”