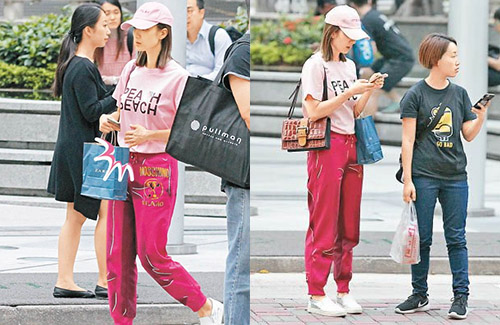 Grace Wong (王君馨) married her longtime boyfriend, Daniel Chang, in New York last year, but due to her busy schedule in Hong Kong, the couple could not complete their honeymoon obligations until just recently.

After 10 years in the industry, the former beauty queen has finally risen to leading status, starring in the TVB anniversary drama OMG, Your Honour <是咁的，法官閣下>. Although no longer single and settling into marriage life, Grace is still a hot commodity in the Hong Kong TV market. She has told the press that she won’t be having baby plans anytime soon, so she could dedicate at least two years of her life for her career before she beginning to settle down with kids.

But maybe this plan is happening sooner than expected.

The paparazzi recently spotted the 32-year-old TVB star in Central with her assistant. Grace was dressed in comfortable clothes—a large t-shirt and sweatpants—which is not her usual style. Grace looked serious, almost lost in thought, as she walked to the doctor’s office. She kept her hand over her stomach.