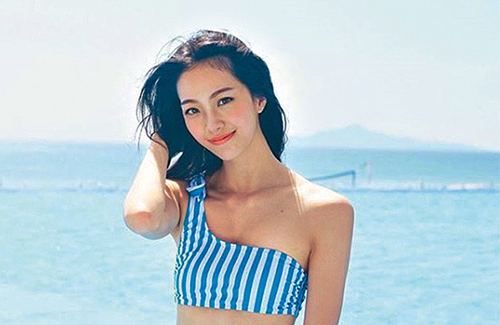 Each year, TVB searches for new female talents in the guise of the Miss Hong Kong Pageant. Each year, MHK contestants become frequent guest stars on tabloid magazines to hype things up, and this year is no exception.

Of the ten finalists that have been selected to compete in this year’s Miss Hong Kong Pageant, which will be held on September 8th, only one contestant made into the cut “rumor-free”: #7 Katy Yeung (楊詠彤), the tallest contestant at 1.78 meters (approximately 5’8”).

But that clean image is slowly being wiped off. 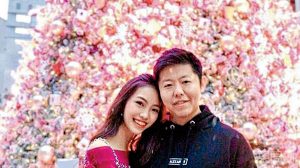 According to a recent tabloid report, 23-year-old Katy Yeung had broken up with her boyfriend shortly before auditioning for MHK, in hopes of using the pageant as an excuse to become a socialite and find a rich husband. A source close to Katy said that her boyfriend, who resembles Louis Yuen (阮兆祥), accrued a lot of credit debt because of her.

Katy has always been one of the more popular picks among the general public since she first auditioned for Miss Hong Kong. The 23-year-old studied criminology at the City University of Hong Kong and worked part-time as a model after signing a contract with Model Genesis. She has received professional modeling traveling, having walked a few fashion shows.

Katy was asked to comment in regard to these rumors. The 23-year-old appeared calm before the press when answering questions, explaining that while she and her ex-boyfriend were financially independence. She has never asked her ex-boyfriend to pay for anything outlandish, and she is not in credit card debt.