It has been rumored for many years that TVB studios is haunted. Many artistes encountered strange happenings that cannot be explained by logic. The broadcasting of drama, Daddy Cool <逆緣>, in which an odd shadow appeared in one scene, once again sparked discussion about the supernatural encounters at the studios.

Lai Lok Yi‘s (黎諾懿) relationship with 52-year-old Patricia Ha (夏文汐) in Daddy Cool is regarded as one of the drama’s highlights. In a particular scene where Patricia was helping Lai Lok Yi get into bed, some viewers noticed a strange shadow on a chair in the room. When zoomed in, a black shadow resembling a long-haired female can be seen. Staff later cleared up the issue and said someone accidentally placed a plank of wood near one of the lights, causing a random shadow. 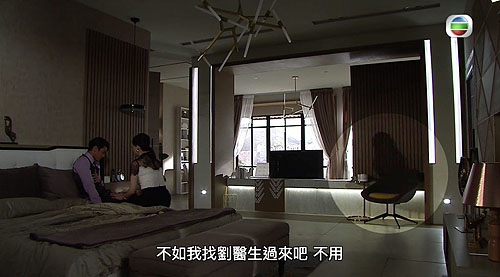 Stories From the Past

When he still worked at TVB in his early career, Nick Cheung (張家輝) encountered a mysterious whistling sound while filming Game of Deceit <騙中傳奇> with Jessica Hsuan (宣萱). Although the entire crew heard it while the camera was still rolling, the whistling sound was absent when the crew watched the playback later on.

Ekin Cheng (鄭伊健) played War Game with his friends inside TVB studios one time, but ended up counting an extra person when he was doing the headcount. Originally with just eight people, Ekin kept counting nine people. Another time when the actor was resting on the carpet in between shoots, a chandelier fell right beside him. When the crew asked if Ekin was hurt, an employee told him quietly that he saw a female figure sitting on top of the chandelier right before it fell.

Raymond Lam Held Down by Female Ghost in Bed

Encountering a creepy incident as well, Raymond Lam (林峯) once said his personal assistant was not able to find him in the room he was sleeping in. Never having left the room, Raymond was spooked as to why the assistant did not see him sleeping on the sofa.

Another time, Raymond felt he was forcefully held down by an unknown force when he was sleeping. He said, “The incident happened two years ago. That night I was very tired. While sleeping, the female ghost held me down and I couldn’t move my arms or legs. But my mind was mentally awake. I felt a cold sensation and saw a misty shadow at the edge of my bed. The harder I tried to move, the harder she held me down. So I said to her, ‘I’m very tired. Tomorrow morning I have to work; please let me go!’ The shadow came closer to me and spoke in Mandarin: ‘It’s him, it’s him…” Then she disappeared.”

Elaine Yiu (姚子羚) claimed she saw a legless ghost in the makeup studios when she was filming To Catch The Uncatchable <棟篤神探>. Noticing a random figure in the corner, Elaine initially did not pay attention until she woke up from ashort nap and noticed that her lipstick rolled near the random figure. About to pick it up, Elaine realized the figure did not have feet and its facial features were blurry. Running out of the studios immediately, Elaine quickly went outside to the hallway where there was more light to calm her nerves.

Even veteran actors Sunny Chan (陳錦鴻) and Bobby Au Yeung (歐陽震華) admitted they have been targets, from hearing random mysterious sounds, to being woken up by an invisible slap to the back of their heads when napping.

While filming A Kindred Spirit <真情>, Joyce Tang (滕麗名) went to the washroom and saw a reflection of herself in two different mirrors. Tavia Yeung (楊怡) saw a bouncing soda can on the empty streets outside TVB studios while taking the bus home after work. 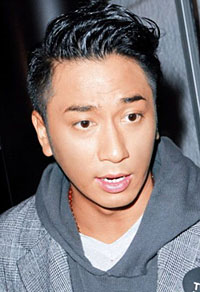 TVB studios has a male lounge with beds where artistes can catch some needed sleep in between filming breaks. Ron Ng (吳卓羲) said, “We were filming Find the Light <英雄•刀•少年> day and night. My colleagues and I were sleeping in the male lounge. Suddenly, my colleague next to me started blabbering as if he was possessed by a ghost. But I couldn’t understand what he was saying. The creepiest part was that his voice sounded like a completely different person. We all got scared and ran off!”

Ron continued, “Some colleagues told me that inside the male lounge, there appeared an eight-year-old girl around midnight. He asked the girl why she was there, but she didn’t answer. TVB studios has a policy that all child actors have to leave by 11 p.m. After this incident, there have been stories that child [ghosts] haunted the male lounge.”

However, the most well-known chilling ghost at TVB is the Milk Tea Lady, whom many employees claim they have encountered. In a female washroom in Studio 6, some female workers said they have heard knocking on their stalls and voices of an old lady asking them if they want to drink milk tea.

Although a lot of these incidents may be attributed to hallucinations of very tired artistes filming into the a.m. hours, these stories still bring chills down the spine when told.