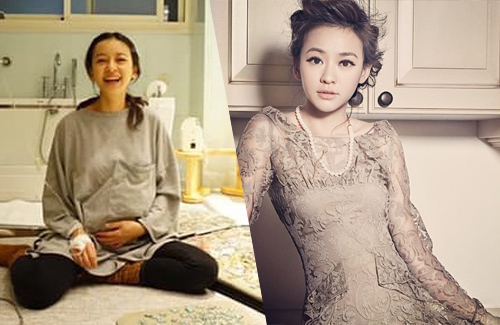 Weighing only 107 pounds before she gave birth to her son, Ivy actually ended losing more than she intended and now weights only 99 pounds. Ivy expressed that she loves to do exercise daily and stayed active even when she was pregnant.

Managing to do regular five-kilometer jogs even when she was carrying her baby, Ivy also enjoyed swimming, yoga, and hiking. Although the amount of exercise she was doing may sound scary as an expectant mom, Ivy reassured netizens that she consulted a doctor beforehand. She also made sure to take breaks and would stop if she knew something was wrong with her body.

At that time, Ivy also ate a lot more vegetables and starchy foods such as potatoes and yams. Not keeping a strict diet, Ivy said she usually ate whatever she wanted, with the exception of no alcohol during pregnancy and even after giving birth. Although she did enjoy the occasional drink or two in the past, the actress stressed the importance of cutting alcohol because of its high calories.

In terms of exercising post-pregnancy, Ivy does a variety of exercises, including working out four days a week for one and a half hours, three days of yoga, and one day of fitness class. Ivy also avidly drinks ginger tea to promote good health and baby-like skin.