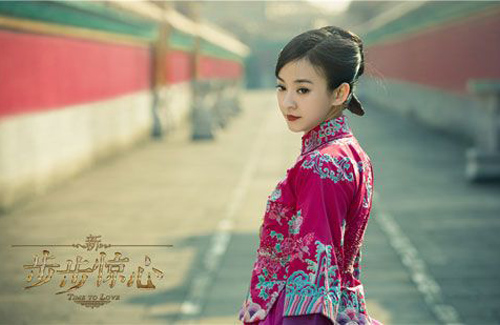 Time to Love <新步步驚心>, the movie adaptation of the popular time-traveling novel, Bu Bu Jing Xin <步步驚心>, recently released its first set of promotional images and its initial preview. The film, which is currently in post-production, is expected to open in theaters in the second half of 2015.

Although Time to Love began filming in November of last year, production company HS Media did not reveal much information about the film apart from its main cast. This sense of mystery was finally lifted as fans were treated to their first glimpse of Taiwanese actress Ivy Chen (陳意涵) as the female lead, Zhang Xiaowen, who accidentally travels back in time to the Qing Dynasty and becomes Maertai Ruoxi.

Both the stills and the preview are characterized by a fantastical, fairy-tale style, with an unexpected emphasis on carousels. The artistic director of Time to Love shared that its team of artists fused Qing Dynasty aesthetics with European styles from the same time period in order to give the backdrops and sets a fresher and more unrestrained feeling.

The preview for Time to Love also showcases the extreme loneliness that Zhang Xiaowen experiences as a single woman living in the city, with only a cat as her constant companion. As the video progresses to her jump back in time, there is a quick montage of war horses, cavalrymen, and finely dressed princes. The final clip shows Maertai Ruoxi running off and leaving a bouquet of flowers behind, ending the preview on a suspenseful and mysterious note.