Jackie Chan Refuses to Add Illegitimate Daughter to His Will 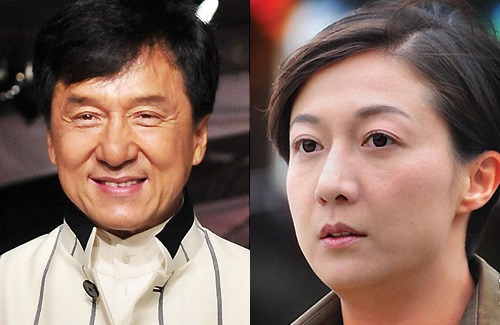 The affair between Jackie Chan (成龍) and his former lover, Elaine Ng (吳綺莉) resulted in the birth of his illegitimate daughter, Etta, in 1999.  Over the years, Jackie did not spend any quality time with Etta as a father. He also decided that he will not leave any money to his daughter in his will.

Not even a Penny for Daughter!

In a recent interview, Jackie spoke about his extra-martial affair with Elaine and their illegitimate daughter for the first time. He revealed that he had asked his wife, Joan Lin (林鳳嬌), for a divorce after the affair was exposed in 1999. Surprisingly, Joan did not even scold him but empathized with his situation instead, advising him to handle the situation immediately. Feeling guilty and remorseful, Jackie decided to change his will to split his estates between his charity foundation with Joan.

Jackie revealed that he will not leave even a penny out of his $2.2 billion worth of assets to his illegitimate daughter, Etta, in his will.  Jackie said, “There is really no point in admitting that Etta is my daughter now!”

However, Elaine Ng was not affected by Jackie’s remarks and appeared to be calm when the reporter approached her for comments outside her daughter’s school. She even hinted that Jackie had never given her a large sum of money for settlement after breaking up.

When asked about Jackie’s comments in the magazine interview, Elaine said she did not read the recent article. As for Jackie’s previous denial that Etta is his daughter and his recent refusal to leave any money for her, Elaine replied, “Let’s not talk about it anymore. It’s already in the past.” She also felt that there is no sense talking about Jackie’s intention of divorcing his wife and insisted that everyone should move on.

Earlier reports suggested that Elaine had received a large settlement from Jackie after their breakup. Once again, Elaine stressed that these reports were absolutely false.

In addition, Elaine lost her job at a Hong Kong radio station recently, but she said the dismissal has not impacted her financial situation yet. She said, “I have a stable income. I have already put the down payments for my house so my the monthly payments are not that harsh.”