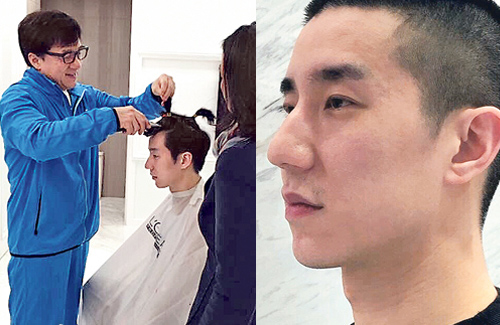 Although Jaycee was a marijuana user for eight years, he promised to not disappoint his family and friends after his release. Jackie also vowed to spend more time with his son. The Lunar New Year marked a joyous reunification for the family in Taiwan.

Although Jackie maintained his strict fatherly-image since his son’s arrest and stressed that he would only see Jaycee once the promotions for Dragon Blade concluded, Jackie was unable to contain his excitement.  After Jackie gave Jaycee a haircut, father and son sat down for bonding time.

Beside his newly improved relationship with Jaycee, Jackie’s Dragon Blade has been dominating box office sales in Mainland China, earning over 500 million RMB since its theatrical release.

Thanking his fans for their support, Jackie promised that he would continue personally handling action scenes and would not use stunt doubles. Unafraid of getting hurt on the set, Jackie believes the best way to reward viewers is continuing to put in his best efforts in movies.