Jacky Cheung’s Daughter Out and About in Central 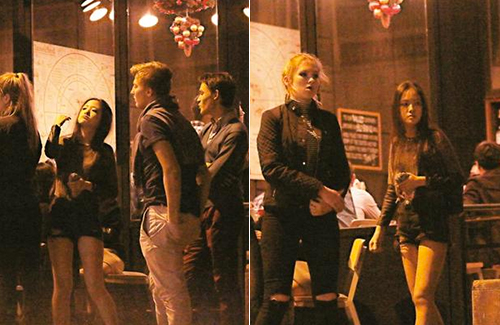 “God of Songs” Jacky Cheung (張學友) and former actress May Lo (羅美薇) have been married for 20 years. They are known for being extremely private and fiercely protective of their two daughters, 15-year-old Zoe Cheung (張瑤華) and 11-year-old Zia Cheung (張瑤萱), as photos of the girls rarely creep up on gossip magazine spreads.

Although not much is known about the two Cheung princesses, Jacky would, once in a while, share tidbits of his family life with fans. In one interview, Jacky said he had given his daughter some sex and dating advice. In another interview, Jacky exclaimed that he spoils his daughters too much, admitting, “They don’t even know how to turn on the washing machine. They leave their clothes all over the place, and I end up picking up after their mess. This is all my fault. I’m so bad at parenting!”

Two years ago, Jacky sent his eldest daughter, Zoe, to a boarding school in the United Kingdom in hopes for her to learn how to be more independent. However, Zoe was unable to adjust well to life in the UK, and asked her father to take her back home. Zoe is currently enrolled in Harrow International School Hong Kong, a British international boarding school in Tuen Mun.

But Zoe’s return to Hong Kong does have its risks. Now in the peak of her teenage years, the 15-year-old is liable to be photographed by the HK paparazzi, and she has been spotted by the paps on more than one occasion.

Some months ago, Zoe was photographed having dinner with a few friends at the Classified The Cheese Room restaurant in Hollywood Road. The paparazzi who followed Zoe reported that she conversed in fluent English with her friends, which were all Caucasian. The friends finished their meal an hour and a half later and split the dinner bill. All grown up, the paparazzi said Zoe has a striking resemblance to her mother, and looked “like a princess” as she walked with her two tall foreign friends to Soho, Central, after their dinner.