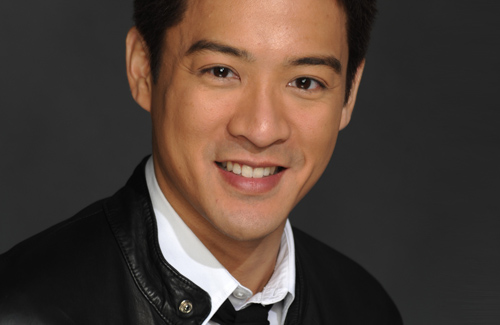 Earlier, TVB artiste Jason Chan (陳智燊) filmed a billboard ad for the Chung Yuen Electrical Company in Chai Wan. It is Jason’s third year endorsing for the electronics company, also revealing that his three-year deal with the company has earned him a six-figure sum.

For this year’s ad, Jason was dressed in three different outfits to outline his three years with the company. The outfits are inspired by three different eras – the roaring twenties, influenced by Leonardo DiCaprio’s look from the film The Great Gatsby; the sixties, which were inspired by The Beatles; and the present-day, modeled after Kim Soo Hyun’s image from the Korean drama My Love from the Star.

“I prefer the twenties outfit,” said Jason. “The details of the clothes are very different from modern pieces, but I also really like the sixties. I got to wear hair extensions.”

Jason was asked if he had saved enough money for his marriage funds, to which he laughed and said, “Not yet, but that doesn’t have a restricted amount.” He did, however, revealed his plans to purchase his own property soon if real estate values drop at the end of the year. “The money in my bank account will not rise in value, so I hope to purchase a 500 to 600 feet unit.”

For the convenience of work, both Jason and rumored girlfriend Sarah Song (宋熙年) are both living in Tseung Kwan O. “I’ve considered moving to Tai Po or New Territories, because my grandmother lives there. It’s alright if it’s far from the company.” Jason revealed that Sarah is also interesting in purchasing property. Asked if they plan to buy it together, he said, “Probably not. If she wants to do it, she’ll handle it herself!”