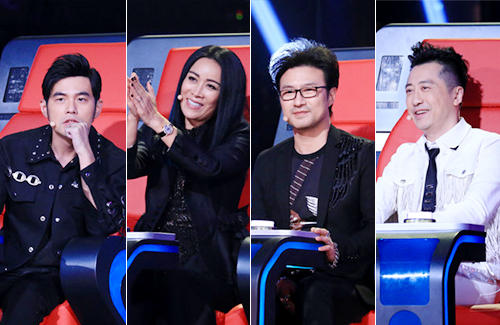 The first season of the new Chinese singing competition Sing! China <中国新歌声> premiered on Zhenjiang TV on Friday, July 15. The show, a rebranded version of The Voice of China <中国好声音>, features singers Jay Chou (周杰伦), Na Ying (那英), Wang Feng (汪峰) and Harlem Yu (庾澄庆) as a panel of four vocal coaches who critique and personally train their own team of new artists.

The competition is formatted into three different stages: a blind audition, a battle phase, and a live performance stage. In the first episode, the four coaches are asked to select their own team of trainees through the blind audition phase.

It was a friendly competition between the four coaches as well, and the four vocal teachers would always jokingly attack each other whenever given the chance.

Mentioning that Jay is one of the most recognized C-pop singers in the world, Jay said, “Many people listen to my songs to practice Chinese.” However, that statement brought upon much laughter among the coaches. Poking fun at Jay being known for his slurred style of singing, Harlem said, “But you can’t even sing clearly!” Na Ying jumped in, “My kids had a hard time trying to understand what he was singing in that song, ‘Tornado’ <龙卷风>.”

Na Ying performing “Only for You”