After performing the last show of his The Invincible 2 <地表最強2> show in Las Vegas, Jay Chou (周杰倫) flew over to New York City to meet up with his wife Hannah Quinlivan (昆凌) as she prepared for New York Fashion Week.

On Valentine’s Day, Jay and his family of four shared with fans the they spent their day strolling around Central Park. He uploaded a picture of his 3-year-old daughter Hathaway doing a “V” pose, writing, “It’s also Valentine’s Day with my babygirl.”

In another romantic photo with his lover of his past life, Jay and Hathaway looked out into the Wollman Rink in Central Park. Just as fans were about to comment about the whereabouts of his 1-year-old son Romeo, Hannah Quinlivan shared a picture of Jay with both kids the following day.

“My valentine,” she wrote on Instagram. For privacy, the young 25-year-old mother photoshopped sunglasses onto Hathaway and Romeo, but the picture marks Hathaway and Romeo’s first “front-faced” picture uploaded to the Internet.

How did you spend your Valentine’s Day? 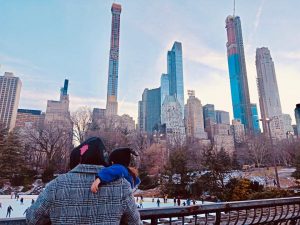 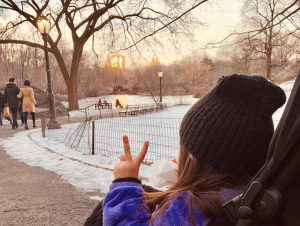