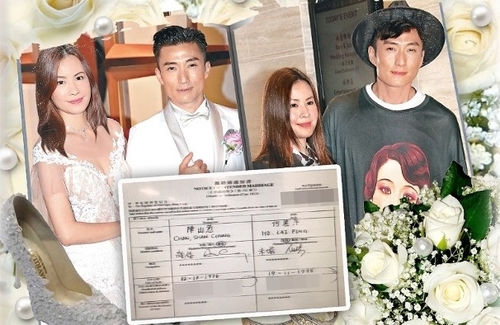 Previously, the 42-year-old Joel Chan (陳山聰) announced he is taking a second shot at marriage with his girlfriend Apple Ho (何麗萍). Set to tie the knot on November 1, the pair recently registered for marriage in Hong Kong. Somehow, their marriage registration got leaked, and it was exposed that they filled out different addresses on the form. In the marital status column, Joel listed himself as divorced, while Apple wrote unmarried.

When the couple began dating five years ago, Apple managed to win over Joel’s friends and family early on. It is known that she is gentle by nature and a good girl who works in the beauty industry. Joel often boasts of her talent in the kitchen since she frequently cooks up delicious meals for him. Joel is also very fond of his fiancee and loves to dote on her. The pair travels abroad from time to time.