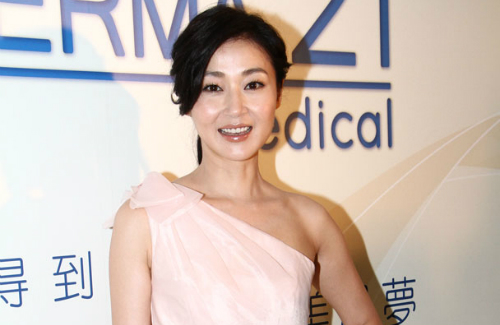 Hong Kong actress Joey Meng (萬綺雯) attended a function today in Mongkok wearing a one-shoulder dress. Although she earlier turned down the opportunity to sign a management contract with TVB, Joey revealed she would still collaborate with the station on a per-series basis. The actress has agreed to star in an upcoming TVB series this December.

Joey shared, “I’ll be back to film a drama at the end of the year. I’ve been having discussions with the producer all along, and I’m interested in the script this time. The cast is also great.” When asked who else will be starring in the drama, Joey replied, “I’ll wait for TVB to release the details, since it’s subject to change. I’ll only confirm myself for now!”

Without having to start work until December, Joey will have a total of ten months to rest and recharge, since she filmed her last series in February. She laughed and expressed, “Ten months is indeed a really long break. When I work, the main factor my husband and I consider is my health. He told me earlier that I should get some rest. The second thing to consider is whether or not I like the script. I can’t always have the best of both worlds, so I’ll have to decide.”

Speaking of how Sonija Kwok (郭羨妮) earlier decided not to renew her TVB contract, Joey remarked, “I’ve never collaborated with her. I believe this is a personal decision, and the most important thing is to feel good about it.” Joey added that she feels comfortable working with the station, since she is familiar with the environment and happy with the conditions. “Nobody forced me to film anything. I chose everything for myself.”

3 comments to Joey Meng to Star in Upcoming TVB Series