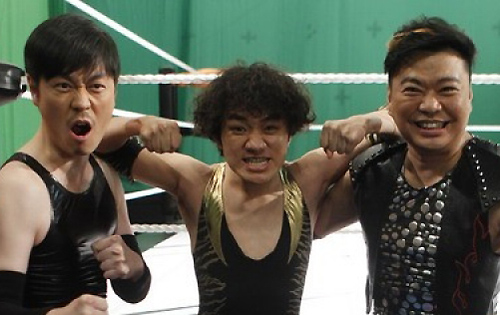 With his reality prankster show Office of Practical Jokes <玩嘢王> raking in consistently high weekend ratings, it is of no surprise that Johnson Lee (李思捷) is getting rumors for having a cocky diva behavior. But could all of this nonsense gossip actually be true?

According to Sudden Weekly’s sources, Johnson has been acting arrogant towards his Fook Luk Sau (福祿壽) buddies, Louis Yuen (阮兆祥) and Wong Cho Lam (王祖藍). Their rumored feud actually began last year while prepping up for their comedy concert; Johnson indirectly admitted himself that there was team discord, “There were some arguments, but [the problem] is about our work, not each other.”

Fook Luk Sau temporarily separated after completing their Hong Kong Coliseum concert last year, but the trio recently teamed up again to film a commercial ad for Hong Kong’s Wellcome supermarket. It has been reported that the trio was hired for at least $5 million HKD to film the ad, in which each member would pocket up to $1.7 million HKD.

In the ad’s original storyboard, Johnson was required to cross-dress as a woman for comedic effect. However, sources say that Johnson insisted to keep his facial hair and refused to dress up as a woman. Allegedly, the trio were almost fired from their jobs due to Johnson’s demanding behavior, but Wellcome finally agreed to give in to Johnson’s request.

A source said, “Louis and Cho Lam are not very happy with Johnson’s fussy attitude. He is very difficult to work with, which is why Louis will not invite Johnson to his own concert this year. He was planning to invite Cho Lam, but because Cho Lam is a managed TVB artist, the commission is expensive, so Louis will just fly solo with his show. It will be like performing at his own Fook Luk Sau concert.”

The reporters of Sudden Weekly visited Cho Lam on the set of Gilded Chopsticks <食為奴> at TVB Studios to ask for his response on his rumored feud with Johnson. Cho Lam admitted, “Johnson insisted to keep his mustache and didn’t want to dress up as a woman. He’s always been like this, so Louis and I decided to dress up instead!” Cho Lam added, “[Honestly], we looked much better than him! We don’t want the audience to throw up at his look!”

Will Fook Luk Sau team up again in the future? “We will be performing together at Lydia Shum’s (沈殿霞) memorial concert on June 1, but Louis has his own big project to do afterwards. I have to shoot a movie, and Johnson has his new drama. We will be preoccupied.”

Louis also confessed that a future Fook Luk Sau reunion will not happen in the near future, “We have our own projects to do.” Louis will be preparing for his own comedy concert, which will be held at the end of the year. “I originally wanted to hold a stand-up comedy show, but it was decided that the show would be better off as a concert. I’ve been in this industry for over 30 years, so I really want to do something for myself.”

Louis confirmed that Cho Lam and Johnson will not perform at his concert. “I want Fook Luk Sau to be like Hong Kong’s own SMAP (Japanese boy band) – to still be together but we each get to do our own thing.”

Is it true that Johnson refused to dress up as a woman in a recent commercial? Louis said, “I don’t know! I just know that I will try my best to coordinate to the clients’ demands.”

32 comments to Johnson Lee In Feud with Louis Yuen and Wong Cho Lam?