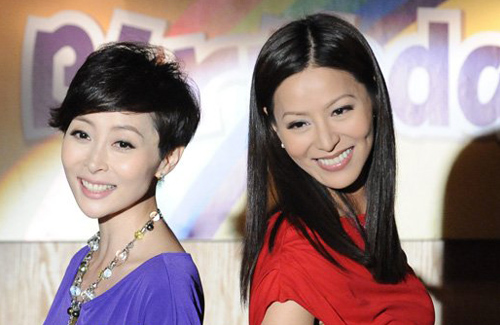 Although Joyce Tang (滕麗名) and Angela Tong (湯盈盈) play bickering sister-in-laws in Queen Divas <新抱喜相逢>, they are good friends off-screen and share more similarities than differences. Both women are blissfully married to loving husbands and driven in their acting careers.

Getting Along with Mothers-in-Law

Joyce and Angela may have problems with their mother-in-law in Queen Divas, portrayed by Nancy Sit (薛家燕), but they are more fortunate in real life.

Married to Canon executive, Matthew Chu (朱建崑), since December, Joyce revealed how she maintains peace with her mother-in-law. Joyce said, “He purposely bought a larger house so we can stay together. We have our own space. When I need quiet time, I’ll go up to the second floor. My mother-in-law also has her own social circle so she doesn’t need us to accommodate or accompany her.”

For Angela, she got along well with her in-laws before she married Chin Ka Lok (錢嘉樂). When Ka Lok is busy with work, Angela would often spend time with her in-laws, cultivating a good relationship. After having a baby, Angela has extra help from her in-laws.

Will Not Give Up Careers

Although they are happily married, Joyce and Angela will not give up their acting careers. Although Joyce made a name for herself in A Kindred Spirit <真情> and the Armed Reaction <陀槍師姐> installments, her career has gone through some dips. Joyce hopes that she will continue to portray memorable roles and have a breakthrough in her career before having children.

Angela’s peak in career came in 2005’s Life Made Simple <阿旺新傳>, in which she shed her normal sexy image to portray Roger Kwok’s (郭晉安) plain neighbor. Although she won Best Supporting Actress at the TVB Anniversary Awards that year, Angela was never fully promoted to lead actress. She cherishes her career and hopes to balance family responsibilities while she is still able to.

Angela said, “I agree a woman should not give up her career after marriage. I am also not suitable to be a full-time mother. Haha, I may talk like this but if my daughter needs me one day, I may change my mind!”