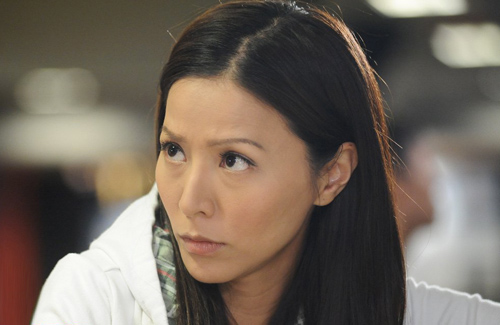 Joyce Tang’s (滕麗名) romantic life had many thorns, but happiness came right after meeting Matthew Chu (朱建崑) in 2011. On December 7, 2014, Joyce and Matthew got married in a beach-side wedding in Ko Samui, Thailand. The 38-year-old is enjoying her new married life.

Joyce’s new TVB drama, Queen Divas <新抱喜相逢>, is currently airing on television. The Lunar New Year drama stars Nancy Sit (薛家燕) as an insufferable mother-in-law who often quarrels with her two daughter-in-laws, respectively played by Joyce and Angela Tong (湯盈盈). Joyce and Angela, portraying former divas in the Hong Kong television industry, also do not get along with each other. Joyce, who also lives with her mother-in-law, expressed that she does not relate to her character at all on the show.

“We don’t have problems,” said Joyce when she was asked if she shared similar complications with her mother-in-law like that on Queen Divas. Although Joyce bonds well with her in-laws, bickering in the family happens all the time. “The elderly can be like children sometimes. They may get angry, but after a while, their anger goes away. Some of my friends like to call me an elderly [expert], but anyone can be one. You just have to spend time and effort to communicate with them.”

Balancing both work and family, Joyce expressed that she may consider having children, but she will leave that to fate. “Sometimes we would imagine that if we have a daughter, she will probably have my face and his intelligence. If it’s a son, he can have my sly personality. But it takes a lot of efforts to raise kids, and it’s kind of scaring me away.”

Joyce shared that her first Lunar New Year holiday with the Chu family had been quite hectic. Cooking for the entire family, the meal took Joyce an entire night and morning to prepare. Matthew said that the will not let Joyce attempt the holiday meal again.

Dating life and marriage life are not much different for Joyce, and she praised Matthew to be an extremely considerate husband. The couple does argue, but after a few heated verbal exchanges, Joyce and Matthew would give each other a smile. Asked if she had any advice for women who are still single, Joyce said, “Marriages are made in heaven. You don’t have to purposely do anything, and when you are with your partner, it is most important to be yourself. My husband I made a promise to each other that when we fight, it would not be over three days.”

8 comments to Joyce Tang on Married Life with Matthew Chu