Joyce Tang Will Get Married This Year 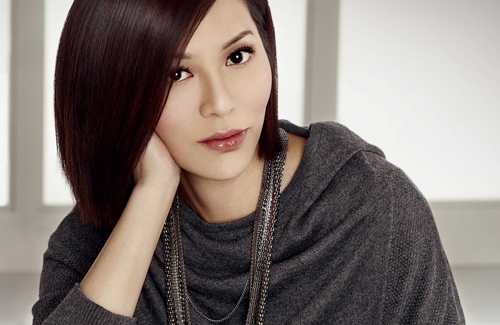 After a string of heartbreak, Joyce Tang (滕麗名) has finally found the love of her life! The 37-year-old actress accepted a marriage proposal from boyfriend Matthew Chu (朱建崑) and the two are set to be married later this year.

Joyce and Matthew were seen on a date in North Point recently. Meeting friends for dinner at the cooked food stalls, the lovebirds were affectionate and attentive. Several times, Matthew placed his hands on Joyce’s shoulders and rubbed her arms. Joyce appeared slightly embarrassed by her boyfriend’s public display of affection but immediately hooked arms with him as they stepped away from the crowd.

Joyce has walked a bumpy road to love, living through two relationships that crumbled before public eyes. In 1998, Joyce met former flame Marco Ngai (魏駿傑) while filming Armed Reaction <陀槍師姐>. The two immediately fell in love and dated for nine years before Marco was caught cheating with a mainland university student. The following year, in 2007, Joyce and Marco announced their break up and Marco immediately married his new lover.

Barely mended from heartbreak, Joyce found herself involved in yet another controversial relationship. While filming War of In Laws 2 <野蠻奶奶大戰戈師奶> in 2007, Joyce became involved with costar Derek Kwok (郭政鴻). Joyce and Derek began dating and were often caught kissing in public. Even though their relationship seemed as stable as a rock, Joyce again found herself a love victim when in 2009, reports revealed that Derek had actually conceived a child with his former wife. The public immediately labeled Joyce as the third party in this love triangle, and Joyce decided to leave Derek.

The breakups left Joyce in a depressed state. The actress was often caught looking glum and underweight. She was also unable to make a breakthrough in her career, remaining only in supporting roles.

Joyce’s love life took a positive turn in 2011, when she first started dating current boyfriend Matthew Chu. A Canon employee, Matthew is deeply in love with Joyce and showered her with gifts and vacations. Just when the public was ready to congratulate Joyce on her new-found love, Matthew was caught french-kissing his official girlfriend. The media once-again labeled Joyce as the third party.

Unwilling to give up on love, Joyce fought back this time and fought hard. Fearing that she will remain a left-over bachelorette, Joyce spent her time wooing Matthew. She cooked him meals and accompanied him everywhere, doing all she could to be extra attentive.

Joyce’s efforts were not in vain. Matthew was touched by her devotion and decided to break up with his girlfriend. The happy couple publicly showed off their love and went on vacations together. Earlier this year, Matthew officially proposed to Joyce and the two are planning to be married at the end of this year. Joyce has finally won her battle and is ready for marriage.

26 comments to Joyce Tang Will Get Married This Year