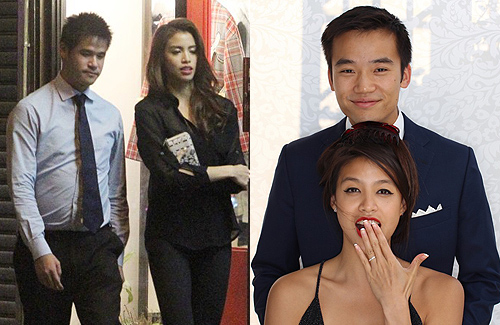 Above: Juliette Louie’s boyfriend (right) is a dentist.

Twenty-three-year-old Juliette Louie’s (雷莊兒) win in Miss Hong Kong 2017 received a lot of controversy. Due to her extreme overbite, Juliette received heaps of backlash regarding her looks. Some even teased that she resembled Uruguayan soccer player, Luis Suárez. Many commented that she did not deserve the crown, alleging that her win was prearranged due to her father’s wealth.

In response to the criticisms, Juliette vented in a one-minute video posted on her social media account, “I obviously don’t care about people not liking me, because what’s most important is to love yourself. I’ve learned to love myself and know my worth. I’m not saying it in a ‘Oh I’m so beautiful and rich’ [way]. And that’s another thing, I don’t know why you guys think that [I’m rich], because apparently, some people believe everything the media says. Maybe because they’re not smart enough to know that the media writes things that are not true. Some people in this world are just not that educated.”

With her straightforward and assertive personality, Juliette has become a target for negative gossip. During her interview recently, Juliette candidly shared that she is not opposed to dating older men. The media immediately went to work to dig up old gossip. After graduating from college, Juliette had dated a wealthy Malaysian businessman, Brandon, who was 14 years her senior. They split after three years. Shortly after, she began dating her current boyfriend, who is a dentist. Juliette admitted that it was she who made the first move and pursued her boyfriend.

Although Juliette often shares the couple’s affectionate photos on her social media, she was recently spotted out on a date with a mystery man. According to media outlets, the mysterious man is quite wealthy and has a good family background.