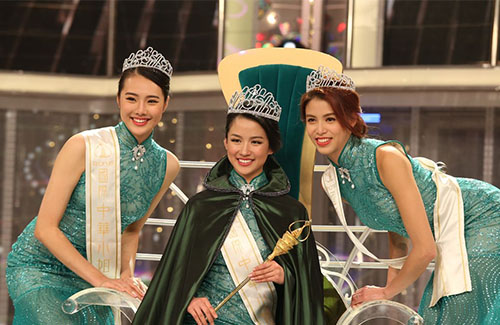 Sixteen contestants from around the world competed for the Miss Chinese International crown last night. The girls, ages 16 to 26, showed off their wits and talents as they answered challenging questions from the judges and hosts. 24-year-old Crystal Yang, who stands at 5 feet 11 inches, accidentally knocked down the mic stand as she was about to leave the stage, but the awkward moment was quickly saved by alert staff members. 22-year-old Rose Li is an alumna from the New York University Stern School of Business, and has a rich background in stage performance. She started learning dance at six years old, and won a dance competition when she was 15. In 2015, Rose competed and won Miss Chinatown USA, and won four more awards at the New York-based Miss Chinese Beauty Pageant, including the crown. Rose won the judges over with her experience, confidence, and multi talents. She was in tears when she accepted the crown, professing that it’s always been a dream of hers to win Miss Chinese International. Rose is five feet five inches tall, with measurements of 32, 23.5, and 34.

19-year-old Angela Liu was not a popular candidate during the pageant’s competition run, but she performed amicably on the night of the finals. Angela, who stands five feet eight inches tall, has measurements of 35, 26, and 37. She dreams of being a strong career woman and a philanthropist. Angela herself said she was taken by surprised when she was announced to have won first runner-up.

23-year-old Juliette Louie, who won Miss Hong Kong 2017, came in third place. She appeared anxious and confused during the question and answer segment, but she commanded attention during her stage performances. Juliette is five feet and seven inches tall, and has measurements of 34, 25 ½, and 35 ½.

Miss Friendship winner Crystal Yang is 24-year-old and performed Hula dancing for her performance segment. She was a popular favorite throughout the competition, and her loss surprised many viewers.