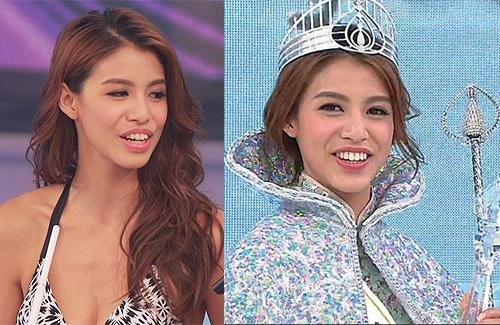 Taking home the title as Miss Hong Kong 2017, Juliette Louie’s win was met with heavy criticism. Due to Juliette’s protruding teeth, many felt that Juliette was not pretty enough to win the title.

Beating out favorites such as Kelly Ng (伍樂怡), Boanne Cheung (張寶欣), and Regina Ho (何依婷), Juliette was announced as the winner much to everyone’s surprise. Not only was the 23-year-old a dark-horse in the competition, she was picked at random to test-wear the winning crown prior to show day. Juliette is the first contestant in history to have both tried on the crown and won the actual competition.

Unlike recent years where Hong Kong citizens had an opportunity to vote for their winners, this year’s decision was left to a panel of judges picked by TVB. In the final round where the votes were tied between Regina and Juliette, Carol Cheng had the final say despite previously casting her vote. This created a public outcry on the unfairness of the ruling, with many netizens wondering why Carol submitted two votes. TVB received 20 official complaints about the unfair and unreasonable results of this year’s pageant.

Netizens left negative comments on Juliette’s Instagram account, claiming that she is not fit for the crown. Poking fun of her looks, some netizens compared her face to that of a horse. Others said she resembled soccer player, Luis Suarez.

In response to the criticism that surfaced hours after her win, Juliette exclaimed, “To be honest, I don’t really mind – we must all love ourselves and I know my own worth! I want to thank everyone who supported me, but I feel bad that people have to start verbal fights, I’m very disappointed in them. They say I’m ugly – but I don’t care! They only know me by my looks and they don’t know me as a person. Everyone can continue saying whatever they want, but I don’t know how to read Chinese and I am not going to waste my time translating everything.  To those who are unhappy about my win, am I supposed to give up my crown? Of course not, I will continue to be myself and won’t change myself to please anyone!”

After Juliette’s win, the media did some further digging and revealed that Juliette’s father is one of Hong Kong’s most renowned designers and that she comes from an extremely wealthy family. When netizens starting attributing her win to her affluent background, Juliette said her father doesn’t mind the comments and is very proud to have her as a daughter.

Juliette was not deterred by the comparison made between her and Luis Suarez. Confident in her own smile, Juliette has no plans to get braces in the future.