“Justice Bao: The First Year” Criticized for Its Outdated Look 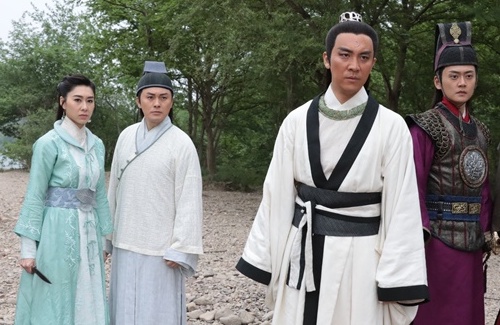 TVB drama Justice of Bao: The First Year <包青天再起風雲> aired its first episode last night and the audience praised it for its breathtaking desert views of Xinjiang, China. There were even camels making it much more realistic than Three Kingdoms RPG <回到三國>. However, this appeared to be the only selling point of the drama.

Netizens pointed out that the costumes, hairstyles, props, and screen coloring all seemed like they were taken out of an 80’s drama. “The background is so fake…it looks like someone from the 80’s going to a photo studio for a photo shoot.” As well, the lighting in Justice Bao was horrible. The faces of female actors looked overly white and the coloring of Justice Bao’s dark face appeared patchy and uneven. There was also a scene where the camera continuously shook making the audience dizzy.

They complained that they had been spoiled by recent Mainland dramas like Ruyi’s Royal Love in the Palace <如懿傳> and The Heaven Sword and Dragon Saber <倚天屠龍記> where everything was beautiful from the actors to the backgrounds.

Netizens also found the casting of Owen Cheung (張振朗) to be odd. He portrays Zhan Zhao (展超), Justice Bao’s bodyguard, but with his skinny frame it looks like Justice Bao is the one supposed to protect him. “He looks like the weakest fighter out of the group! Even Raymond Cho (曹永廉) looks stronger than him!”

6 comments to “Justice Bao: The First Year” Criticized for Its Outdated Look