Katy Kung and Ng Yip Kwan Rumored To Be Dating 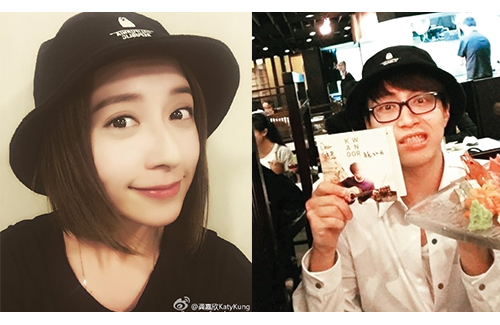 James Ng Yip-kwan (吳業坤) won the Internet’s heart when gave an emotional speech after winning the gold newcomer award at the JSG Music Awards held last month. Kwan Gor’s signature eyeglasses were all fogged up after he gave his tearful winning speech, and the screen captures of his tears became a meme on the Internet. Entering the new year, Kwan Gor once again drowned the audience with his tears when he received another newcomer award at the Ultimate Song Chart Awards.

Though he came to be known as Hong Kong’s favorite “toxic boy”—a Cantonese slang term referring to men who are not popular with the ladies—Kwan Gor actually earned quite a lot of new female fans in the past few months. His silly yet cute “toxic boy” image won the hearts of many fangirls, increasing his fanbase.

But Kwan Gor’s “toxic boy” image may be just a facade. According to the news tabloid Eastweek, Kwan Gor has been frequently seeing his Come Home Love <愛回家> costar Katy Kung (龔嘉欣), leading speculations that the 25-year-old Kwan Gor and the 26-year-old Katy Kung may be in a relationship. A copy of Love at 136.1 <愛在136.1> and Women’s Sex Files <女人性史檔案>, both written by famous Hong Kong psychologist Su Hei (素黑), were also seen lying in Kwan Gor’s car.

Their close relationship first came to attention last month, when Katy posted a rather cryptic message on her Weibo an hour before Kwan Gor received his Newcomer of the Year honor at the JSG Awards. Katy shared a selfie of herself wearing a black bucket hat, writing, “I hope everyone will be able to find their own sunshine. I am willing to become your sunshine.”

Katy’s message appeared to be referring to Kwan Gor’s winning song, “A Song from Sunshine” <陽光點的歌>. But what really took everyone by surprise was Katy’s bucket hat—it was the same bucket hat that Kwan Gor had been wearing in the past three months.

Both Kwan Gor and Katy have not responded to these rumors yet.

Kwan Gor made his debut in the industry in 2010 through the singing competition, The Voice 2 <超級巨聲2>. He made his acting debut the following year with the miniseries Dropping By Cloud Nine <你們我們他們>. Katy, on the other hand, made her acting debut through the 2008 idol drama Dressage to Win <盛裝舞步愛作戰>. She previously dated Patrick Tang (鄧健泓), and was once linked to Sammy Sum (沈震軒).