With the great feedback Death by Zero <殺手> is receiving, the cast has been receiving much praise for their acting skills and ability to bring out the complexity of their characters. Perhaps most eye-catching is Katy Kung’s (龔嘉欣) Dark Angel character. The 30-year-old actress surprised viewers with her portrayal of the gothic assassin, which is a drastic change from her usual pretty-girl characters.

To make Dark Angel come alive, Katy worked hard on her action scenes and tried a daring punk style. She reflected, “Action scenes are not the most difficult because you can practice them. If you don’t do well the first time, you can practice and do them 100 more times. Somehow, someway, you will get it right. For scenes where I do not have any lines and can only rely on my expressions and eyes to convey emotions, it is quite difficult. Wearing the proper clothes, makeup, and the environment can help me get into character and the expressions would come more naturally.”

Reminiscing on her difficult and long road to recognition when she entered the entertainment industry at 16 years old, Katy said, “I am not someone who got a good head start in the race. On the track and field, I’m like someone who is placed and runs on the outermost track. I have to run longer than other people. However, I am a very ambitious person. I often tell myself that there is nothing I cannot do. I don’t have any networks or connections, nor did I enter the entertainment industry through pageantry. I started from zero, so I just do my part the best I can. I cannot make everyone in the world like me.”

Finally achieving recognition, Katy attributed it to her hard work. “A lot of people say I tolerate a lot. I can indeed tolerate a lot of sufferings. People who are doing something they love will learn how to endure all the sufferings that come with it. Even if it is difficult, you are willing to deal with it.” 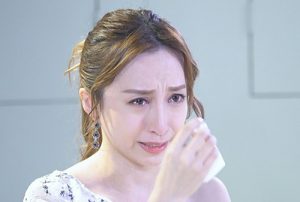 Despite her slow-to-rise start, Katy is thankful for having started young and being able to learn from veteran actors. One of her most respected seniors is her costar, Elliot Ngok (岳華), who portrayed her father in Be Home for Dinner <誰家灶頭無煙火>. Remembering the late actor, Katy started crying and recalled, “When I filmed the drama, I really did have the feeling of family. Elliot was really like my father, and I am thankful he treated me like his own daughter…. Even to this day, I don’t like to think about his death, so I have ignored all news about it.”

On Finding Success in Life and Love

Her career turning point was perhaps Two Steps from Heaven <幕後玩家>, where she portrayed Bosco Wong’s (黃宗澤) wife. Her tragic character and believable portrayal won her TVB Best Supporting Actress in 2016. Despite this recognition, critics still doubted her because of her youthful looks. “People said things such as, ‘How can she portray Bosco’s wife? She looks more like his sister.’” There was a lot of pressure, but I used that pressure and converted it to motivation. Pressure will not make me unhappy. I am not that type of person. Pressure will instead push me forward.”

With a career on the rise and successful business ventures, would Katy follow the footsteps of her good friends, Grace Chan (陳凱琳), Jess Sum (沈卓盈), and Zoie Tam (譚凱琪), and turn to personal goals such as marriage? To this, Katy responded, “I really don’t want to get married for the sake of getting married. Actually, I am not necessarily unhappy being single. For me, perhaps I need to find someone whom I can be happy with it.”