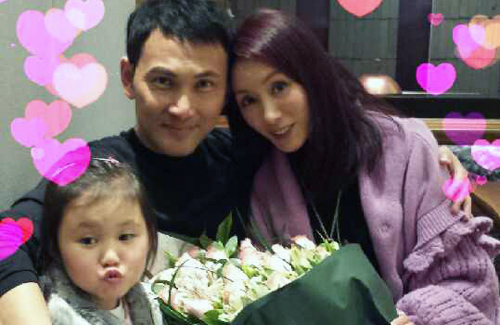 Kenix Kwok (郭可盈) and Frankie Lam (林文龍) celebrated their ten-year anniversary on March 10. Despite having to face some major challenges throughout their long relationship, the two were luckily able to overcome them and seem to have mastered the skills needed to maintain a healthy, happy marriage.

Kenix and Frankie met while filming 1995’s Down Memory Lane <萬里長情> and began dating shortly after. Although Frankie seemed like a ladies’ man on the surface, Kenix discovered a mature and dedicated person underneath and fell deeply in love. After dating for nine years, the couple finally tied the knot in 2004.

While the two were often praised as a model couple by the public, their image was unfortunately tainted by a major scandal. In mid-2009, an audio recording was sent to local tabloids hinting at Frankie’s extramarital affair. Kenix was also accused of cheating when additional audio clips surfaced, thoroughly shocking the public. Although both denied the affairs, many believed that their relationship was on the rocks. When the couple announced that Kenix was pregnant, some speculated that it was a last-resort tactic to save their ailing marriage.

Regardless, the birth of Tania Lam (林天若) in 2010 had certainly brought the couple closer together. Both doting parents, Kenix and Frankie often shared photos of their daughter on Weibo. As expected, Tania was a big part of the anniversary celebration on Monday. Showing off her happy family photo on March 11, Kenix thanked fans’ blessings and emphasized her love for her husband and daughter. “… Yesterday was our tenth year. Including our courtship, it has been nineteen years [that we have been together]! I want to thank [Frankie] for his tolerance, sacrifice, and care throughout the years. I will also work harder, harder, harder! Love you and Siu Jeun [Tania’s nickname]!”