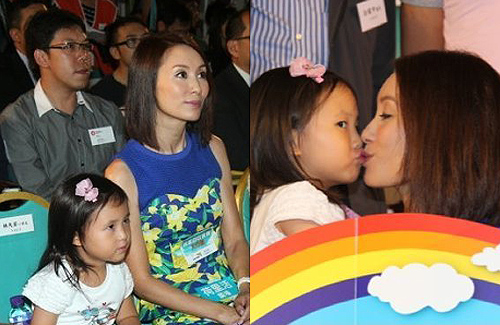 Kenix Kwok (郭可盈) truly treasures her time with husband Frankie Lam (林文龍) and their 3-year-old daughter Tania Lam (林天若). A popular TVB fadan with many top series to her credit, Kenix is willing to set her acting career aside to care for her daughter. Her unconditional love is certainly reciprocated. While out at a charity event today, little Tania freely displayed affections for her mother, giving her kisses as they posed for photos. Kenix appeared smitten and repeatedly praised her daughter and showed off their close relationship.

On July 31, Kenix, Frankie, and Tania appeared at Plaza Hollywood in Diamond Hill to attend a charity book sale event organized by World Vision Hong Kong. The event is a part of the organization’s Used Book Recycling Campaign, aiming to raise funds to build schools and dormitories for needy students in Liannan, Guangdong. This is the first time the family attended a public event together, and they found it meaningful and heart-warming.

Even though she is only 3 years old, Tania already understands the importance of helping those in need. Kenix commented that whenever Tania sees starving children on television, she always asked to share her food with them. Kenix is encouraged by Tania’s giving nature, and plans to visit poverty-stricken regions when her daughter is older to educate Tania on practical ways to help.

Tania was in good spirits at the event, and was happy to pose in front of reporters. She gave Frankie and Kenix a kiss on the lips while on stage. Frankie later turned to hug Tania but was sadly rejected. He joked that even though Kenix is the stricter parent, Tania seems to prefer her mother. Kenix seemed happy that she has such a close relationship with Tania. She showed off Tania’s ability to easily imitate others, saying that Tania always asked to help Kenix put on her clothes. Apparently Tania is very perceptive and has learned how to dress simply by observing her mother. Kenix also praised her daughter for her musical talents, saying that Tania enjoys music and would bop her head and dance to it anytime, anywhere.

Since they are very much in love with their daughter, reporters asked Frankie and Kenix if they would try for another child, perhaps a son. The couple said they will not force it and will let fate decide. When asked if they will ever film together again, both Frankie and Kenix said that it is unlikely for now. Kenix further explained that she enjoys spending time with her daughter and has no plans to be away from her for an extended period of time.

Kenix said, “I am very grateful that I can accompany my daughter these past few years and watch her grow. These moments are more valuable than anything else. You can’t buy these memories no matter how much you are willing to pay. For now, I will only participate in smaller projects such as filming commercials or attending functions. These short-term jobs are very suitable for my current schedule and gives me more time to spend with my daughter….”