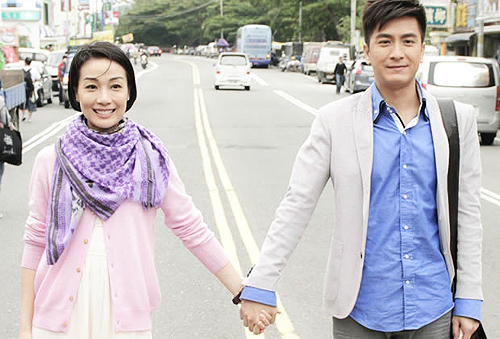 The various story arcs in Triumph in the Skies 2 <衝上雲霄II> were designed by the drama’s producers to reflect trends in modern love relationships. Kenneth Ma (馬國明) and Elena Kong (江美儀) portray a pair of “friends with benefits” who turn to each other for sex in a no-strings-attached arrangement.

After divorcing pilot Tony (Patrick Dunn 鄧梓峰) and ending her loveless marriage, flight attendant (Elena Kong) feels lonely and even attends a male escort venue. Roy (Kenneth Ma) dates two women at the same time, but he prefers the convenience of a purely physical relationship. Finding Heather to be a compatible friend, Roy understands her physical needs and agrees that they should “have a good time” together in bed. Both are not prepared to ultimately fall in love. Kenneth and Elena thought of ways to make their characters in Triumph in the Skies 2 more realistic, especially the details leading up to their four bed scenes.  Kenneth said, “We have to persuade ourselves first before we can film them!” They magnified Heather’s understanding personality and Roy’s youthful energy.

Kenneth was excited by Roy’s “friends with benefits” story arc in Triumph in the Skies 2. “I was very immersed in my character. I am afraid to do this in real life, so I can only do this in the series!” He believes the relationship is very realistic, “A classic male archetype who still lives with his family in adulthood and is cared by others. This type of man needs the woman to make decisions, while he is able to satisfy her passion!”

Elena was initially heavily criticized by viewers as looking too mature to play Kenneth’s lover. She is equally bewildered by changes in recent fan sentiments. “Earlier, they scolded me every day, saying that we were incompatible. But lately, they said that they want to watch our storyline. I don’t know what happened, but I hope everyone will share their opinions after watching!”

Triumph in the Skies 2 has soared to the top spot as the series with the highest ratings year-to-date, followed by Inbound Troubles <老表，你好嘢！>, Friendly Fire <法網狙擊> Sergeant Tabloid <女警愛作戰> and A Great Way to Care 2 <仁心解碼Ⅱ>. TVB also announced that they will be changing the guidelines in how program ratings will be determined, which may have a positive effect on dramas to be broadcast later this year.